I seldom leave Wharfedale for caving these days and it's been an age since I did a three peaks classic. My increased bias towards the Mossdale'esque type caving venues means I spend a lot less time on ropes as well so I wouldn't usually be interested in a conventional trip down places like Rowten Pot. I do have a long held affinity for through trips though and Rowten's is one of the finest examples in the Dales.

I hadn't forgotten how thrilling our last trip through there had been so didn't hesitate in agreeing to join Ian for this one again.

Sunday dawned damp but promised to improve, the days prior had been intermittently very wet and there was still plenty of water about. Even when accompanied by a steam of rising vapour and a threatening rumble Rowten was still welcoming and neither of us could wait to get going. We'd unwittingly chosen very hostile conditions to do this in last time and today would be no exception.

A regular trip to the bottom and back would require plenty of rope and the use of a vast amount of the fixed anchors. The most endearing thing about pull-through trips is the simplicity of the act and in a spectacular venue like Rowten Pot the minimalist adherence to safety can be breathtaking.

To minimize problems retrieving our main rope we used a short length of 8mm as a jump line for the first two bigger pitches, this allowed us to access the cleanest hang for the main rope and avoid it snagging. Ian rigged ahead while I stripped our frugal resources behind, our connection to the surface severed the moment I pulled down the jump line. There's little adventure to be had with certainty.
Immediate awe is guaranteed in Rowten Pot but the gravity of the situation prompts diligence.
One can travel very light for a descent in this style, a harness and climbing belay plate, but unlike previous occasions I carried a few extra bits just in case. Should we be marooned at least we could get ourselves out should another party turn up.

Gathering depth is quick to pass and the first two pitches count for the majority. But the moment you think things are going too smoothly you suffer a delay. Our main rope snagged a projection while in freefall from the head of the second pitch. At first it wouldn't budge but then surrendered through a painfully slow combined effort.

The 8mm would suffice now so we bagged up the hundred metre pile of 9mm, a lot of work considering we'd be emptying it out for the sump dives ten minutes later.

The nature of the trip changes far too quickly at this point and I quickly began to miss the exhilarating gravity defying antics of the entrance shaft. The stream is avoided, the hint of daylight lost and that grand cathedral architecture is reduced to subterranean corridor and cascade, .
The elements that shaped this environment quickly return yet appear to clash with increased intensity.

Two more drops remain yet are little considered and the base of Rowten Pot is finally reached to a finely sculpted rock shelf and the confluence of swollen waters.

This is where the truly governing aspect of the journey is encountered, where the commitment placed in this endeavour lies. Sixty feet of water filled passage with two air pockets in-between. A barrier separating one cave but the same cave from the other.
A sturdy hand line is installed through-out the entirety of this obstacle, and all one need do is take a breath of air, pull on the line and glide through. We had with us a mask and three kilos of lead apiece, neither are necessary but help make it slightly more comfortable and controlled.
I've heard some suggest the use of a heavy flat stone but always felt it a useless laughable suggestion. Assuming you can find one that makes an ounce of difference, it's probably the best way to bust your wetsuit jacket zip and should you get stuck or wedged under water a solid protrusion would not help matters!

In addition to ourselves we would be dragging 120metres of rope and a tackle bag tied on in the middle.
Ian went first with one end of the rope and made very casual and deliberate progress. I fed out the rope in unison with his movements and to make sure the rope being fed didn't snag. This is one of the factors that can exacerbate solo trips of this nature.
The first sump is the longest and with water levels being what they were today would've been decidedly longer than it usually would, more than 30 feet long.
My only concern ever is the bag getting stuck, should this occur then Ian was to keep the rope under tension while I dived in behind to free it. Blessed we were though and the tackle bag was given passage which always surprises me considering how much they snag when dry caving. Once all the rope was through I donned my mask and made my way through. The water was unexpectedly very cold accompanied by a strong current, obviously from the upstream inlet which was still ejecting flood waters carried far underground from further up the valley.

The airbell felt uncannily silent after the racket in Rowten and you find yourself shouting over ringing ears.
Ian carried on through sump 2 as the 300 foot island of rope began to dissolve. I waited for the end to disappear then followed behind once again. The bell chamber between sumps 2 and 3 felt very small and the usually non-existent final sump would not only have been tricky to find for the unacquainted but longer than I've ever seen it. I didn't wait for the rope to disappear this time for the air may have quickly become foul so I grabbed the tackle bag and assisted Ian's efforts by diving through with it in my hand.

Rowten Passage was a sight to behold in places and fresh froth hung in abundance, the passage had no-doubt been impassable quite recently. We were forced to swim in places and actually missed a junction we are both very familiar with due to it's sumped appearance. The inlet that feeds the Mud River Series was still discharging a heavy flow and with this added to the feeders upstream had caused the passage to backup quite a bit.

We skirted the Master Junction and embraced the final remnants of this adventure waste deep in the turbulent rapids of the Master Cave.......

It's now a week later and here I am again at the Master Junction. I had a desire to taste a little more of Kingsdale before the week was out. So a very fluid trip through Simpsons Pot was had, but only due to the fact all excepting Slit Pot was rigged. I'd fortunately beat the de-riggers of the BPC to the entrance of Simpsons and made final use of their hospitality. Thirty minutes after leaving the surface I was back in the Master Cave after an almost daydream like experience.

I needed that! and should be found sporting classics a little more often.

Thanks also go to Ian, you are as dependable and solid a caving partner as ever.

Copyright
© Simon Beck, 2016. The copyright for this article and photographs remains with the author. It should not be reproduced without permission. 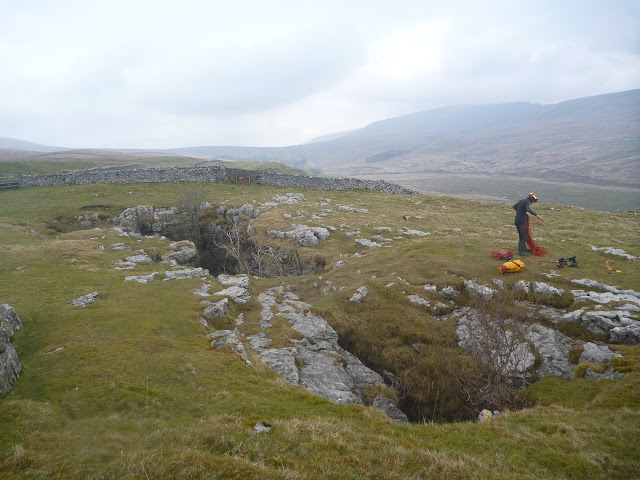 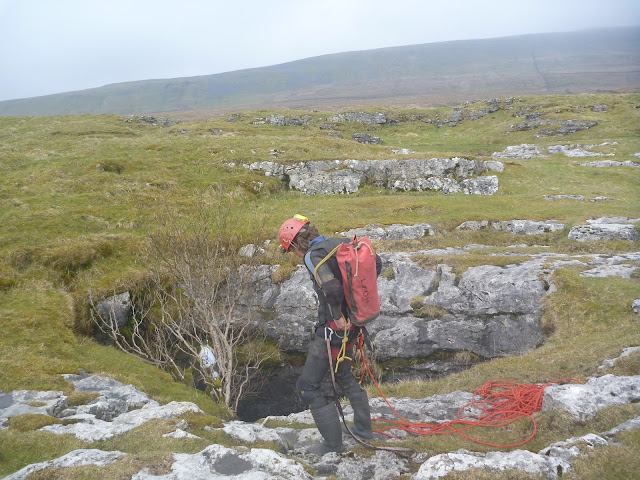 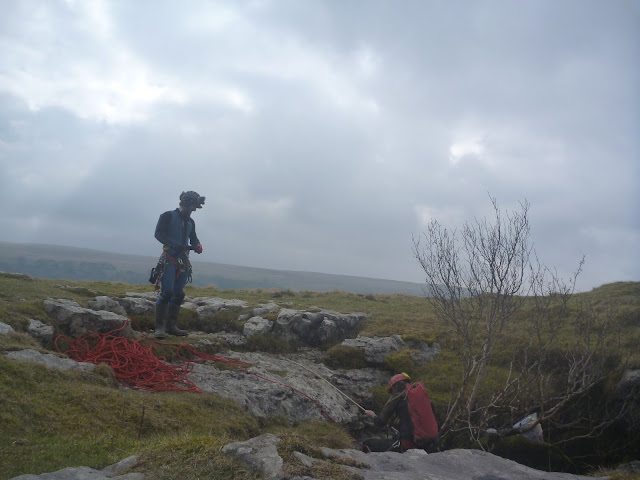 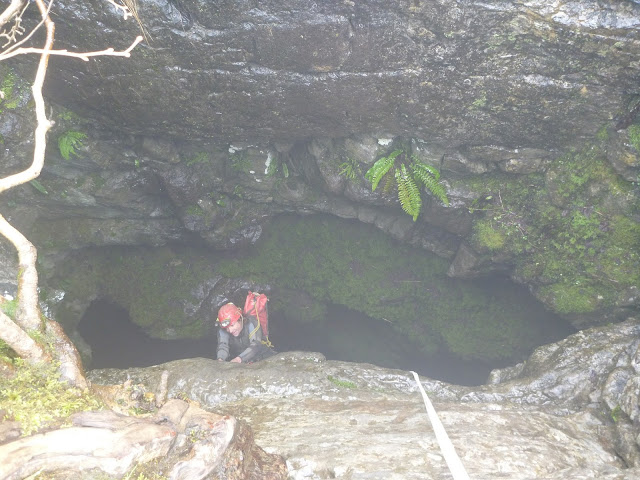 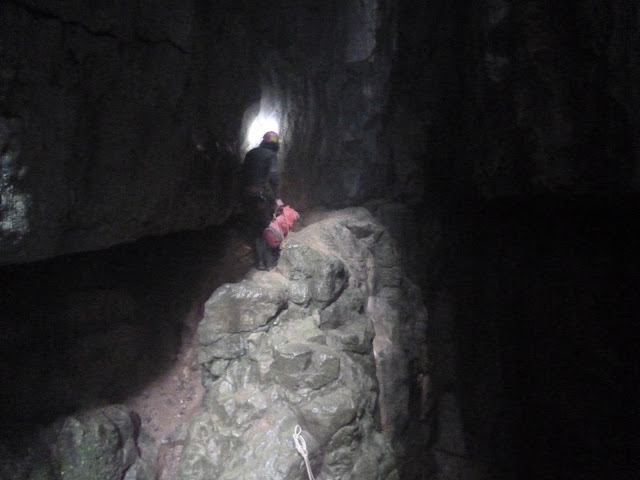 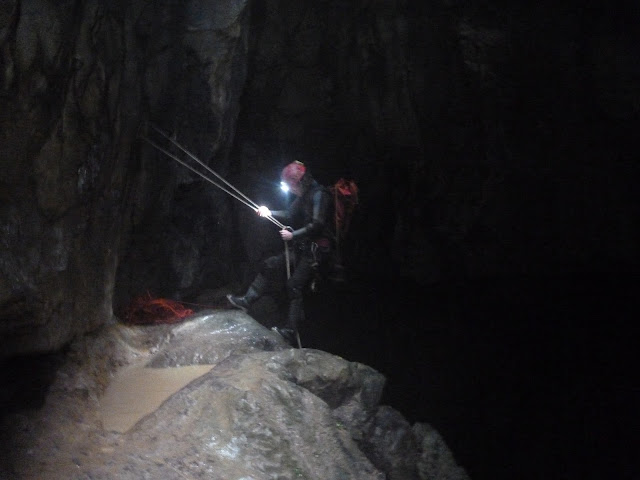 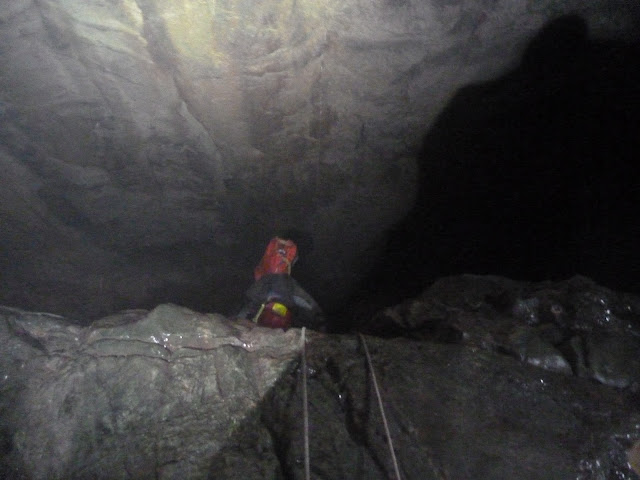 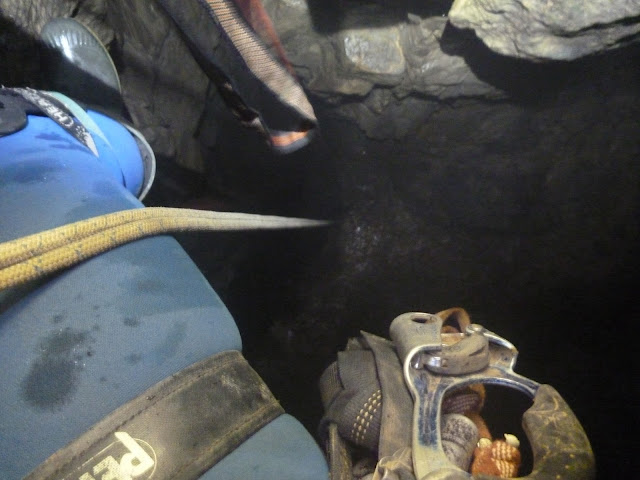 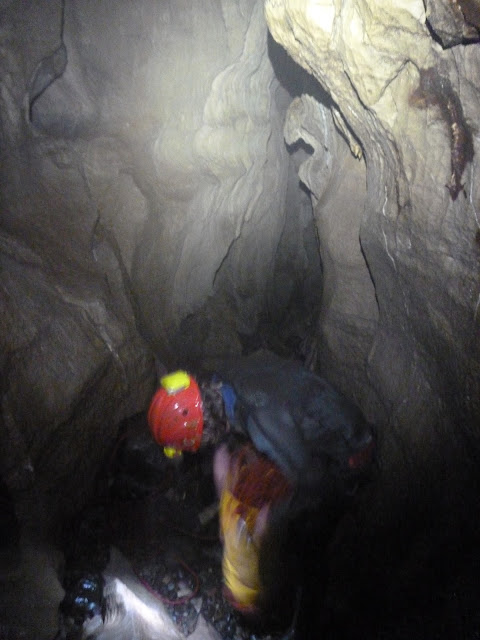 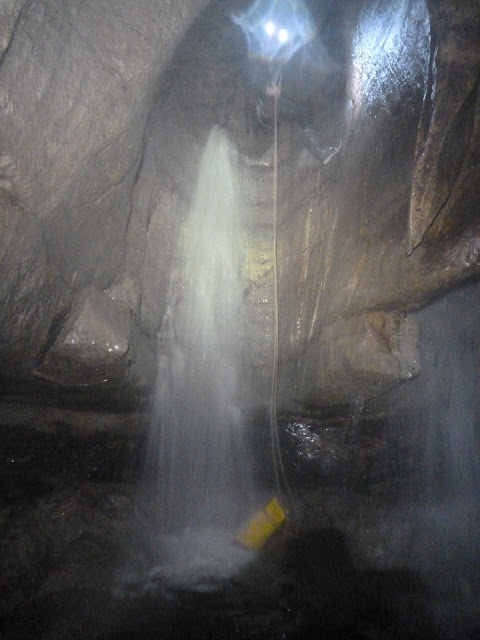 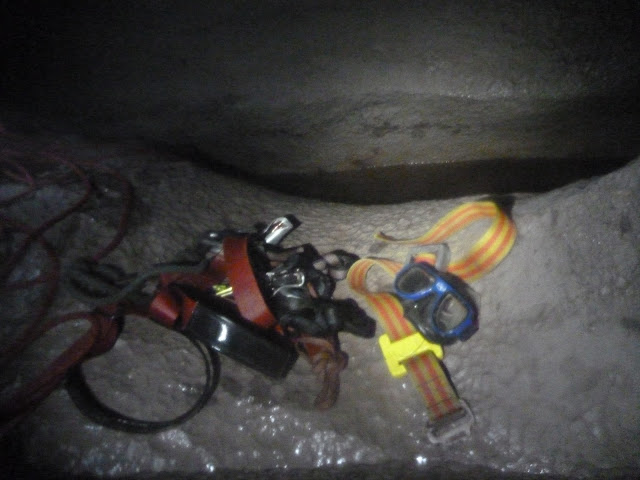 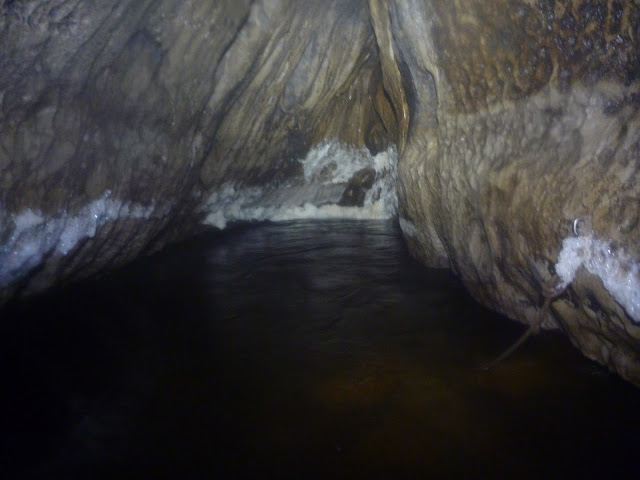 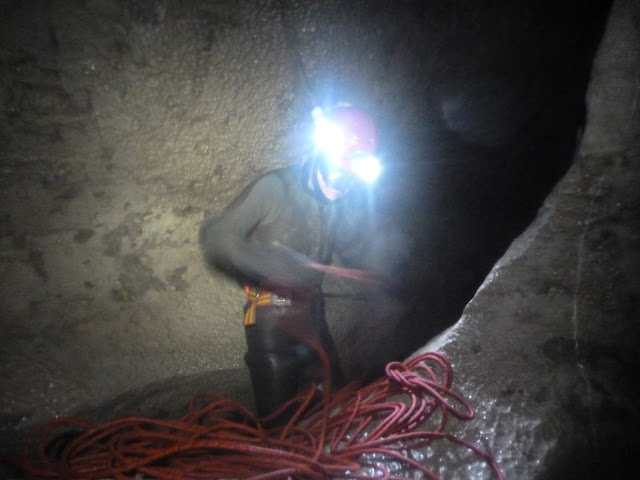 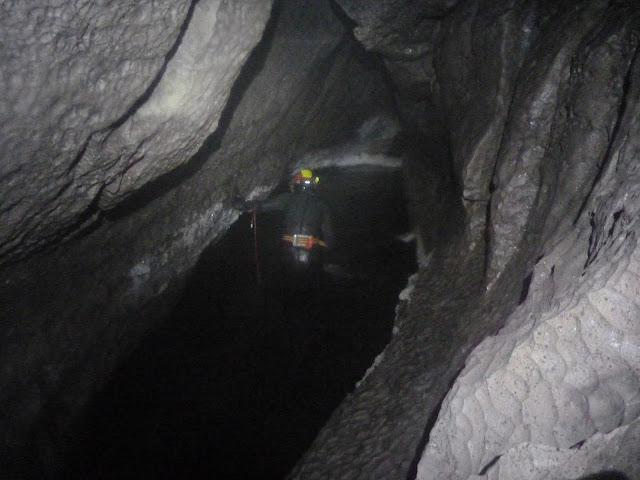 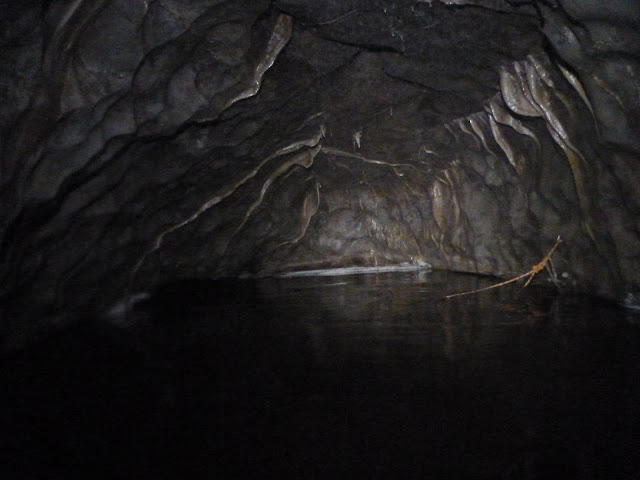 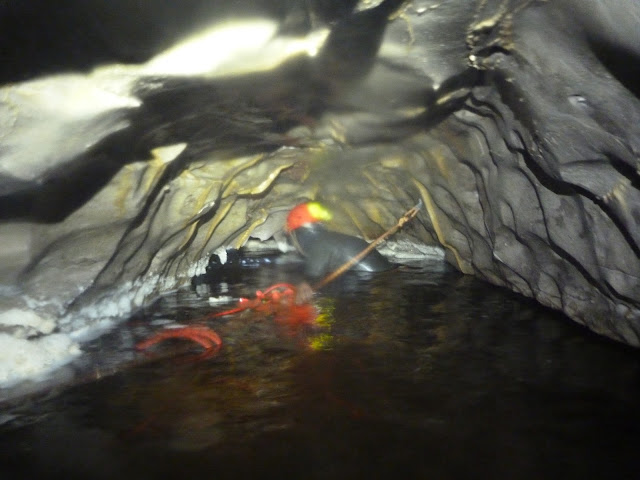 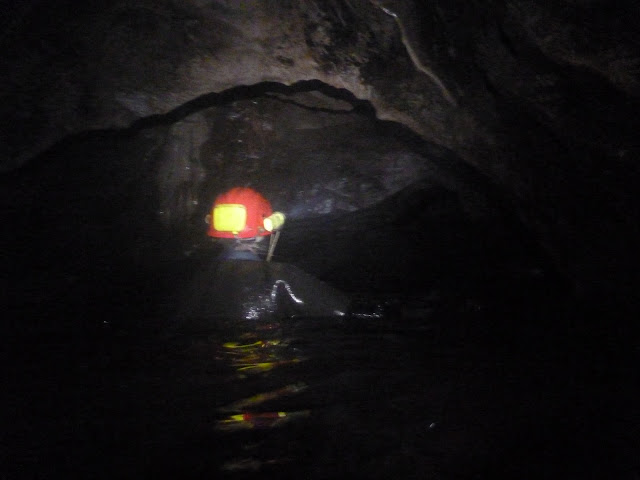 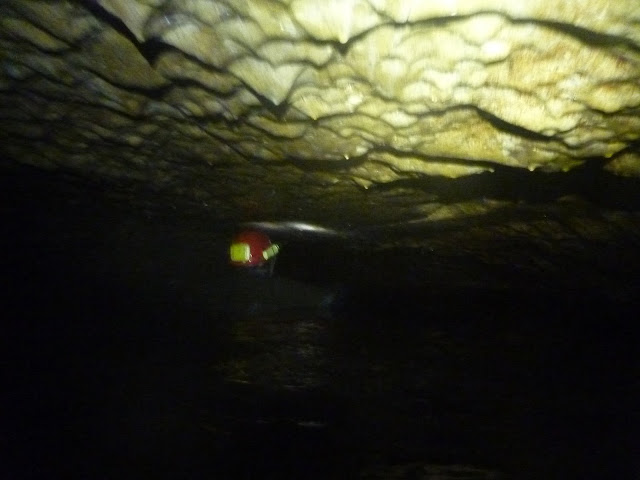 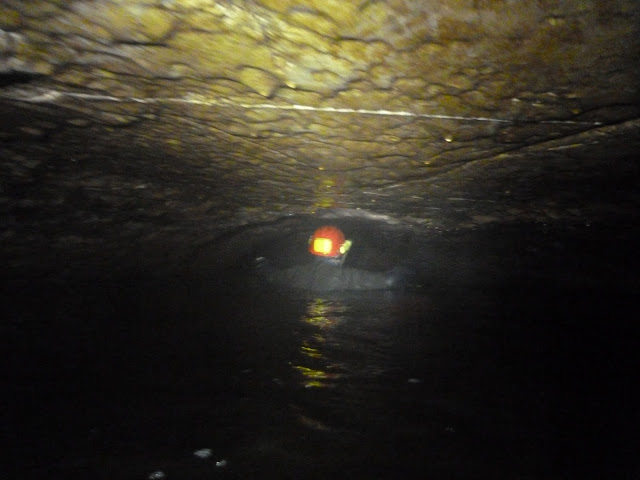 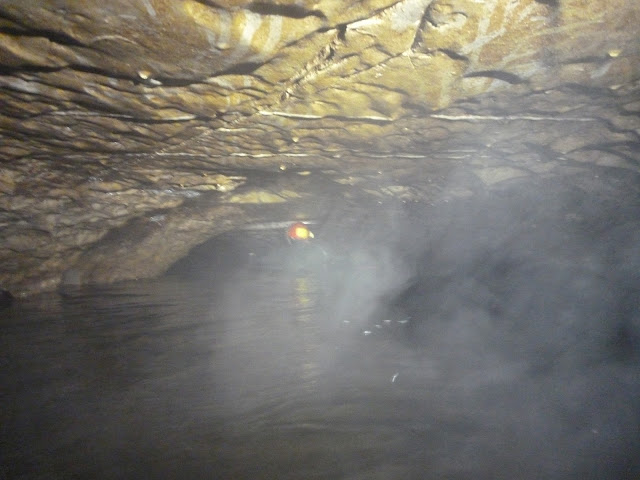 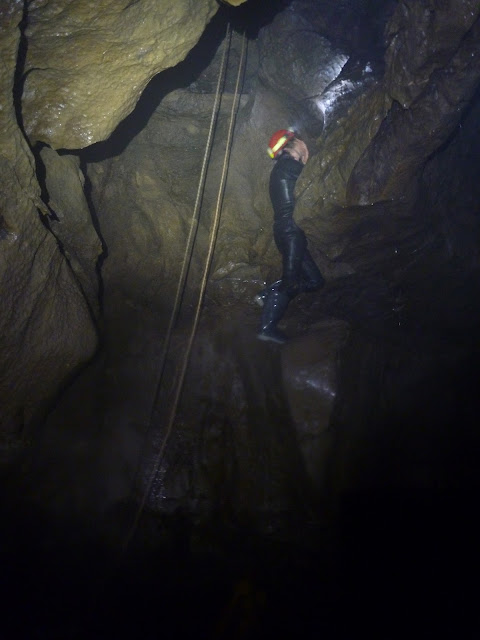 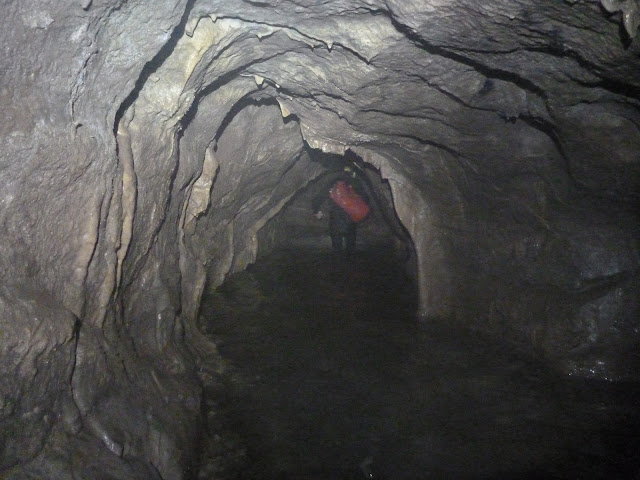