It was the autumn/winter of 2011 when I began clearing out those old telephone lines from the entrance series of Mossdale. I only managed two or three evening sessions at the time and it was a good few years before I returned to the job. Even though that early attempt brought progress to just beyond Fossil Chamber, it still produced nearly two full tackle bags worth of wire.

Something that I've lacked until recently were a decent pair of cutters. The wires are tricky to cut or break without them and early on I managed with a pair of old pliers. But with the clear up operation mostly being undertaken as a side to doing other things in the system, I managed with none at all.
For the most part, the multitude of telephone wires were horribly tangled together, badly buried among the shingle and cobble banks and positioned in awkward to reach areas off the main route. Very few of the segments cleared and collected were easily won.

It was 2015 before I returned to the job. A visit alone early in the year brought progress to Blackpool Sands. There was definite satisfaction in seeing a clean, clear route from the Assembly Hall back to the surface. Something which definitely spurred me on to see the job out.

During a series of sporting trips later in the year (Sept/Oct 2015) and while in transit during a trip with Jane Beck, we managed to collect the majority of what lay between Straight Way, Wiggle Junction to part way down Easy Passage. This produced a large tangled pile which was stashed in a side rift.

Further short sections were collected, again while in transit over the following year (2016). A visit just before Christmas that same year saw the remainder of Easy and Right Passage cleared and another pile deposited near Easy Junction.

A deadline for the clean up operation at this point began to feel well overdue!

The second visit of 2017, with Andrew Wilson, was the first time the end felt like it may be in sight. After a traverse of the Borehole Passage/Oomagoolie circuit we headed for Rough Chamber and with each of us armed with a large plastic sack we hoovered up everything that lay in our way. Bagging up that landmark spool with many yards of wire still attached from the chamber felt noteworthy and rather symbolic. I've passed knowingly by it for so many years and yet today will be the last time I see it there in Rough Chamber. I've never had any moral issues where Mossdale was concerned. I think those who continued exploration afterwards crossed that bridge for us a long time ago. The events of that day and those that followed in it's wake will always haunt those who were there. And for those of us who visit in the present, a lack of material evidence will do little to exorcise that fact.

Our two bags just about contained their respective piles from Easy and Right passages, some bits from Broadway and another earlier cached pile from Confusion Passage. Our by then slowly deteriorating and rather heavy loads were then deposited high on the flanks of Boulder Hall.

During the next visit, this time with Alex Ritchie, I collected  two long sections of black and yellow wires during the exit. The first ran from Boulder Hall through the swim to where it was buried in the cobble dam just prior to the 1st Drown or Glory. For the most part this section ran well away from the main route and was pegged, wrapped and snagged among the boulders above. The next section of black and yellow ran from just upstream of the 1st Drown or Glory all the way to Razor Rocks and amounted to a sizeable pile of wire. Both sections were stashed out of the way to be collected later.

The next two trips with Adele Ward finally concluded what remained of the collecting process.The very last section that remained from midway down Blackpool Sands to where I'd left off in Razor Rocks was dealt with immediately. Adele had kindly provided some decent wire cutters on the first of these two visits. These were used to tidy up a handful of snags along the route to Rough Chamber, the most notable being the short length snagged from above and hanging down at Wiggle Junction.

Although the odd straggler may well exist the route from the surface to Rough Chamber is now completely clear of telephone wires. All that remains of the task is to remove the huge pile that presently resides in Boulder Hall and a smaller one from Razor Rocks. This is something that as already been planned for the coming period. An update will follow and a list of thanks to all those involved when the job is complete.

Copyright
© Simon Beck, 2017. The copyright for this article and photographs remains with the author. It should not be reproduced without permission. 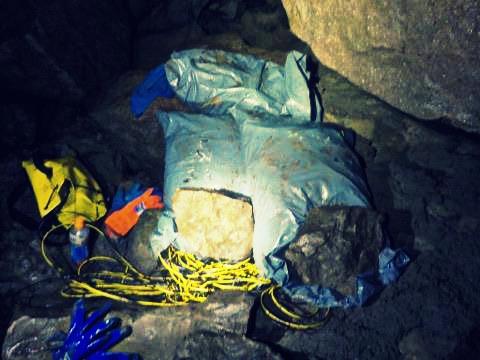