'Stream End Cave had lingered for so long it had begun to lose definition. My presence the previous fall, had long since faded to the same black as my passing'  (A quote from another piece that I never completed, named 'Trial by Obsession'. Relates to that unbearable wait I endured through the winter of 15/16 in returning to Stream End and another attempt to reach the final choke)

Adele had commented the previous evening that the weather looked good for the week. I couldn't make Wednesday(Yoga) and she couldn't make Thursday. Friday seemed miles off so Tuesday evening it was. I should have been gaining some much needed rest after nearly 10 hours spent down there over the weekend. Fuck rest! There was much needed work that required completion and who was to know how long this settled weather would last..

I managed to get away early that day and we met at Yarnbury for 3pm. Adele had kindly acquired a 24" wrecking bar during the day. I hadn't the time to visit the merchants in Skipton and stick to the schedule. I also brought a very handy fold up saw for chopping out the old timber props.

I picked up the pace during the approach, which didn't go amiss. Bless Adele for keeping up and suffering in silence. By this point and after so many visits lugging equipment I'm probably the fittest I've been in years.

Very low water levels in Mossdale Beck, the lowest they've been over the course of the previous weeks/month..

Damp wetsuits are of little comfort at this hour of the day, let alone any other time for that matter. We both had to endure this predicament. Mine was still wet from the weekend and Adele had given her's a thorough clean in the previous 24 hours. We appear to be quite equally matched on the hardy bastard scale.

Temperature of the water had fallen remarkably. We both gasped initially but one soon adapts.

My third visit in four days!

Back down the entry to Ouroborous which felt like a bit of a chore. I was tired and my body very sore! I haven't felt like this since my 18hours down Langcliffe Pot the previous year.

No prep work was required at the Depot, although it doesn't feel like much of a depot anymore, most of the stuff is in Piston Chamber.

First job was to remove some of the old timber so I could finish off some final bits of the cage, i'm glad I remembered the folding saw, very useful! An hour at least was spent finalising the cage. I then completely removed the old timber frame aside from a prop in the centre. The prop is either well swollen and wedged or is carrying some the weight of the big boulder above. I suspect the former though. The timber is so badly rotten that it would have given way by now.

Once all the jobs were complete I gave Adele her task/test of the day. This was to find her own way back to the water level markers just upstream of Boulder Hall. I called it a mock exam at the time before the main one to make her way solo all the way to the surface.

She then headed for the Depot for a final smoke and began to make her way out. I had a poke with the pinch bar and managed to bring down two large blocks out of a handful of hanging death in the rift above. I regretted not getting a longer bar, but will manage with what we've got for the time being.
If I'm to proceed along the choked rift ahead I need to either bring these boulders down or continue the scaffold to protect myself from stuff falling from above.

Began to make my way out and caught up with Adele at Confusion Passage. I then switched my lights off and shadowed her back to our rendezvous point. She'd supsected I'd been behind but laughed when I appeared a second later out of the inky blackness. I've been strict with Adele but felt it necessary to avoid her making the mistakes we have all made and learn't from (sometimes the hard way) over many many years of Potholing.

On arrival at the surface it was obvious the midges were out in force! I suggested we hike a little and find somewhere a little breezier. We got changed on the top track with a slight breeze, no airbourne critters and a remarkable twilight view of Great Whernside. Trip duration 2.5 hours. 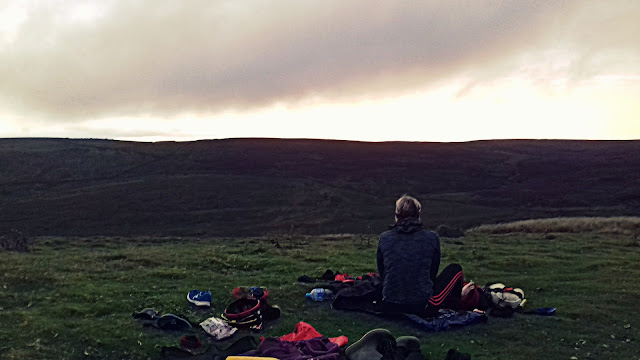 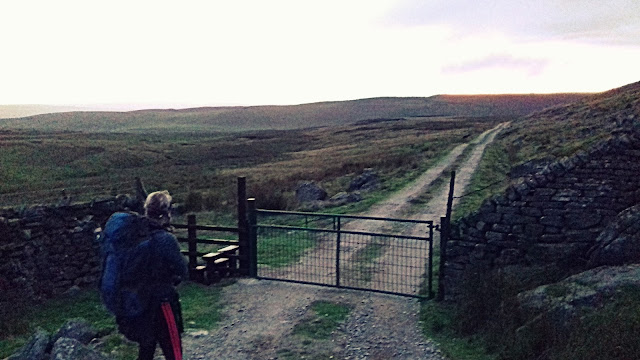 'Another connection severed another comfort scorned'

Another solo visit, but I did miss my companion on this day.

Late start Saturday. Felt like a real drag even though it was only mid afternoon.

No anxiety felt at all about working in the choke on my own, I would just have to be careful though. I always give myself a large margin where my call-out times are concerned. Which means trouble would spell a long uncomfortable wait. It still beats the alternative.

Underground for just before 4pm. Had with me a scaff tube some more clips and a hammer and chisel.

Need to keep the depot stocked. I would rather bring equipment in dribs and drabs than have a repeat of the mass of gear we sherpa'd during the preparation end of the project.

The entrance series was very damp, probably the draught/condensation, everywhere was dripping.

I found a marker stone that had been placed by somebody at Blackpool Sands and fresh footprints that weren't ours. We take a slightly different route in places to the obvious one.

Canals/swims felt warm again. My load was awkward but I was adamant I was taking it all the way.

Once at depot I loaded up my work bag. It's getting like the start of a work day!

First job was to chop out the remaining prop. I'd been thinking about this for a few days but was a little apprehensive. I needed the space to work and continue forwards more easily so began to slowly cut through the middle. Once part way through the cut I gave it a bang with the lump hammer hoping it would buckle. I heard something dislodge in the choke above so retired to the shelter of the flat roofed boulder and continued to saw at arms reach. After thirty minutes of cutting the prop finally admitted defeat and was removed with zero movement from above.

Had a good clear out within the cage then began to wrestle with the two large boulders I'd dropped the previous session. I made slight headway but one of them is far heavier than I can manage while lying down and it would knacker my already tender back. I was on the verge of purchasing a drill so decided I would break these up in to manageable pieces on the next visit or two.

The day was obviously getting late by this point. plus there was little else I could do without the necessary resources. Packed up and headed out. I'm glad I went to the extra effort of anchoring everything down. The weather was on the verge of turning for the worse. A very cooling inward draught was noted in the entrance series, a common observation over the previous period. I made my exit just shy of a 3 hour trip.

I got changed on the track above again to escape the midges with that fantastic view to marvel upon. Not a soul seen since leaving the car or during the return.

I've decided it's time to begin a detailed survey from part way down Ouroborous or from the Depot and down to Piston Chamber. New terrain will be entered very soon so I would prefer to have something I made earlier to add too than wait till exploration fever sets in and I haven't the time.

Copyright
© Simon Beck, 2017. The copyright for this article and photographs remains with the author. It should not be reproduced without permission.
Posted by Simon Beck at 21:13