Bank Holiday weekend. I prayed the forecast would allow at least a couple of visits.

Rain was forecast for later in the day so I scrapped the early start and waited till noon. The forecast can change radically between early doors and noon, wise to hang on sometimes.

Black bottomed Cumulus clouds in abundance floated by like galleons as I made my way to Mossdale.

Water levels were well down from the previous week.

I'd brought along a Base Jack which I had wrapped in scaffold foam for the journey.

A strong outward draught was felt at Fossil Chamber.

Saw a new inmate (trout) while passing the Swim. A Brown Trout fresh from above in all it's colour and splendour. Not a common sight.

Arrived at the Depot with no problems and in record time.

Organised my tools, did one cut (scaff pole) then headed for the choke. I completely dismantled the previous session's efforts and decided to start from scratch. Both Base Jacks were incorporated to gain a good solid anchor to build the cage from. I made very good progress and was back at the Depot in no time to cut a few more tubes. I became completely lost in my work that day and proceeded well beyond the point where I felt I'd done enough. Removed some large boulders and rubble from the choke to give the corners of the cage a good solid footing and increase the size I could make it. Openings and hollows above and below began to appear, but straight ahead along a choked rift is still the most favourable. Measured up my next few cuts for the following day then called an end to the session.  I left the choke that day very satisfied with my progress. More than half the cage had been constructed.

While organising the Depot for my departure and anchoring things down, I came across Adele's cigarette stash in one of the Daren Drums. I was almost tempted to treat myself but fortunately resisted the temptation.

An enjoyable exit was made right up until I swallowed some airbourne insect in the Swim - tasted rank! and stuck to the wall of my throat for most of the trip out.

I made the surface after a 4.5 hour trip, although it felt like twice that. Overjoyed to be finally getting somewhere with this. The next section after the cage is complete looks challenging but I will cross that bridge and deal with it when the time comes. 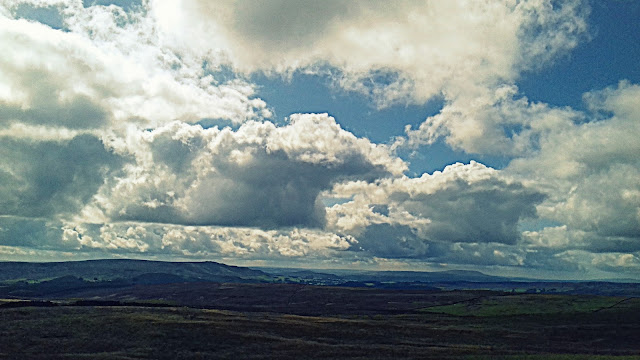 The duration my patience allows is fleeting. Before I seek charity in exchange for relief. The mood my quarry presents I struggle not to re-create. Neo psychedelia and dark melodic beats bring me a little closer. Altered frenetic states remove me from the loop completely. (Another quote from an article that never saw the light of day, no further comment!)

An early start after only 5/6 hours of sleep. Arrived at Yarnbury around half eight. I was tired after the previous day but began to feel better once I'd got going.

Was a warm start to the day and I was stripped down to a T-shirt after ten minutes on the track. A very thick low lying band of cloud had engulfed me by the time I'd reached the region of Howgill Nick and the temperature had plummeted. Although I was keen to get cracking the approach was a wonderful experience. Walking alone with that early morning serenity as my only companion. I can remember the feelings of dread I used to experience during those lonesome early morning approaches to Mossdale in my younger days.

Arrived at the scar by 10am. I was underground and quickly on my way by half past. Ian and Adele had agreed to join me later in the session and were en-route from the North East.
Even though I could've quite easily justified not bringing anything along for the carry, the masochist in me had insisted on a 4' length of Scaff tube, which I took all the way.

Heading back through the canals/swim should have felt novel, with it being just over twelve hours since I passed back this way. Mossdale has almost become an everyday reality. The best reality I could ever dream of. It's just a pity that my other life and my bad habits within that world steal me away far too often. I lose sight of this world and my aspirations as a caver far more than I used to.

It was tough going back down Ouroborous. My body was definitely very sore from the previous days session. First job at the Depot were the cuts I'd measured up yesterday. Was slow getting warmed up with the cutting and it took ages with my final already worn hacksaw blade. Had mean't to buy some fresh ones, but it slipped my mind!

Grabbed my tools, some more clips/tubes and headed for the choke knowing full well it would be another long session. The intention and something I keep forgetting is to bring a stove and brew kit. A fresh mug of tea/coffee will definitely make these long sessions far more bearable.
The first job was to begin building the left side of the cage. More rocks were removed to find a solid base for both legs on that side. Putting it all together was a faff, but once in it appeared bombproof. Headed back to the Depot to do another cut - quicker this time after setting up a far more solid stall. Started to get very hungry at this point but ignored my stomachs complaints and again considered one of Adele's cigarettes.

With the majority of the cage almost complete I heard the distant echoes of Ian and Adele. I'd suggested that they begin digging out the sand in 'Bit on the Side' (an oxbow part way along Ouroborous) but they failed to find it and I was about done by that point. A steady exit was made and the surface reached after a five hour trip for myself. Overall a very productive back to back weekend! 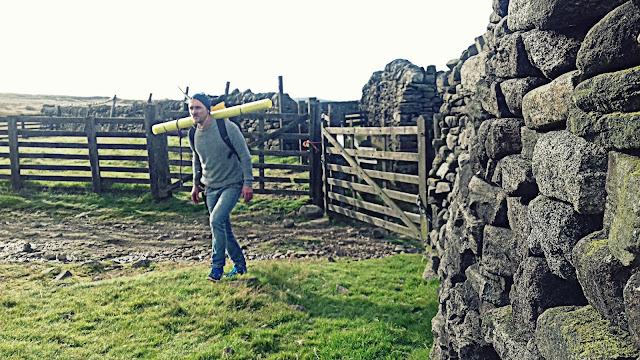 Copyright
© Simon Beck, 2017. The copyright for this article and photographs remains with the author. It should not be reproduced without permission.
Posted by Simon Beck at 18:32