There was't much chance of me passing up this opportunity. Felt wrecked before, during and after, yet satisfaction throughout!

Arrived Yarnbury at 9am. Was at the Scar for just after 10am.

The forecast gave it overall generally good, with a chance of the odd shower. I sensed it was too early to know for sure, and one of those days when it could drastically change. I pushed such doubts aside with a decent call-out margin.
This was left with R-Gibson for 8am the following day. I'd instructed him to hand things over to Adele if I didn't appear by late evening. Adele agreed she'd visit the cave before taking any further action. Leaving this with someone who knows the cave, especially the Swims, is always a weight off my mind.

The area around the sink was heavily iced and looked very pretty so early in the day and after such a cold night.

Took a few photos before I got going. For once a few of myself.

Not sure I really got a rhythm going at all during entry. Felt clumsy mostly which I put down to the tenderness felt from Friday.

The temperature of the Swims was absolutely ridiculous!!! The airspace throughout was filled with an eerie mist, reducing visibility at times to zero, and appearing like Cryogenic Vapor. Visibility was so poor I laughingly strayed off course at one point.
I thought of those presently active in the Far Western Passages and wondered if they'd be as keen if they had to do this every time. There is an added realm that comes with doing anything beyond these flood prone sections. To the point that, what comes before is a separate cave, governed by far more sympathetic laws. It is hardly something you just choose to believe either. It's an emotional response for one's safety felt the moment passage of that section is made, and no more so than during less than benign weather conditions.
I doubt our reasons for been here have a lot in common, nor our methods, but anybody who trails up here deserves a pat on the back, and the kudos for going that extra mile to do so.
My ethical stand point is quite a conservative one, and may stand to be tested in the future, but I can't deny that with modern cave exploration techniques a huge advantage stands to be gained at sites with known potential such as the Far Western sector of Mossdale. With the tenacity a prolonged effort would require success is almost guaranteed. Doesn't mean such a success should be something to be proud of though.

My hope with this project, aside from my own personal reasons, is to show, not only can this be done without the strength in numbers so many believed it would require, but also that, the potential had always stood to be extracted with the right approach and attitude, and not just because of modern day techniques.
Success for me comes second to having pit myself against a far greater opponent!

Was a slow journey to the choke, and took at the very least 45 minutes. The drill box was crammed with extra's, plus I'd stuff to collect en-route which we'd jettisoned on Friday. This included some of the capping stuff, I decided to leave (last min) during exit, and the lump hammer I'd accidentally placed in Adele's tackle bag, which she almost liberated back to daylight.

Bringing a fresh pair of dry work gloves in the drill box, was one of the best decisions I've ever made! Having dry warm hands throughout the working segment made up for the rest of me that wasn't.
I was also trying out some homemade elbow pads, cut from the legs of an old wetsuit.

First job at the choke was a massive tidy up. Over the course of my excavations from both the choked rift and Lefthand route I'd been stacking objects removed to the sides or where ever I could cram them. This had severely reduced the working area and access to it. I probably spent close to an hour on this and shifted the vast majority well back, and out of the way to Piston Chamber. I was for once careful not to crush any fingers, something that appears far too easy in cramped quarters. It surprised me how long I spent on this task considering how impatient I'd been to conclude the unfinished business of Friday.

The tidy up definitely relaxed me a little, and even on it's own gave the day's efforts instant worth. Next job was to consider my options and commit to a definite course of action. After the previous sessions disappointment I assumed I was back to square one. The subterfuge in this instance didn't last. After inspecting the cavity a little more thoroughly this time, I quickly deduced it was worth sticking with for the time being. I'd experienced a blast of air in my face and a strange sense of some downwards feature looming, just out of sight.

During the previous weekend in Manchester I'd been in the company, unknowingly at the time, of an ex-member of Groove Armada. This was on my mind during the session and prompted me to give this feature a temporary name after some of their material. Couldn't think of anything that fit so ended up with the Leftfield. Beats the cavity down to the left!
Also of note is a house I crashed at that same weekend belonging to someone with a strong link to New Order. My relationship with the Manchester scene is a fairly recent thing (3yrs ish), yet strange how again, there is cause to refer back to my 'Mossdale Connection' statement - i.e; elements of my life both in/out of caving intertwined with Mossdale... in this instance Joy Division.
http://simonbeck.blogspot.co.uk/2017/03/the-mossdale-connection.html

Spirits were definitely lifted with this strange hunch of something lurking out of sight. I'd taken that first session of the year personally and expected far too much.

Replaced the scaffold rails removed (Fri, Sesh 30) to allow access to the higher level rift/chamber. Again mainly for protection.
I was now free to begin work on enlarging entry to the Leftfield, but was stolen by other tasks for the remainder of the Session.
It was decided the slab that makes up the floor of the cage needed to go. With plugs/feathers it required a reduction to 4 separate lumps before I could shift it. It's removal opened a can of worms when the Northerly leg of the Cage was undermined. In rectifying this I faced a Domino effect of adjustments due in part to requiring a few longer poles. This unexpected task cost a lot of time to complete.
When I originally built the cage my options were incredibly limited. Due in part to the lack of space, awkward working conditions/position, timber props amongst wedged boulders & walling. I hadn't dared remove anything till the scaffold was pretty much complete. Even though I've now got the space to make corrections, the cage is still pretty good left as it is. Plus I've identified it's not presently carrying any weight from the block above. Only with opening the Leftfield route was I able to observe the block's contact points with another at the Northerly end.

By this point I'd spent four hours at the Choke.
With loads still to do, and a part of me wanting to continue, I knew I was pushing it staying any longer. Plus I'd hoped to make the surface during daylight hours. I'd slept maybe four hours the previous night with work to come the following day.
My body was in that limbo state you get after long periods in neoprene, when perpetual exertion keeps you just about warm enough, but you're not really comfortable.

Was a very productive session with an outcome I'm glad it hadn't shared with Friday's visit. Energy had been well directed even though I'd gained shite all really.

Stopped during the exit, just before Broadway to capture some photos of RightHand Passage. A task I've been putting off. With only my Samsung phone the quality would be poor, but this would allow me to experiment with the idea of what I wanted.
I'm not sure whether it's something I'd seen elsewhere and copied or stumbled upon by accident while photographing Straw Chamber in Langstroth Pot during a solo visit. There's probably a technical term for it but the result is the silhouette of the caver against their own lights and surrounded completely by darkness. The striking keyhole features of RH Passage was one section of cave I'd wanted to try this on. The quality of what I captured was poor but the results were pretty spot on.

After hours of sensory deprivation, something as simple as returning to the stream way at Broadway can seem highly pleasurable. We are usually so lost during our withdrawal in the comforts that await us at home, to be aware of aroused sensations.

I paused for a moment in Boulder Hall and could almost feel the energizing effects of those resonating forces of nature. 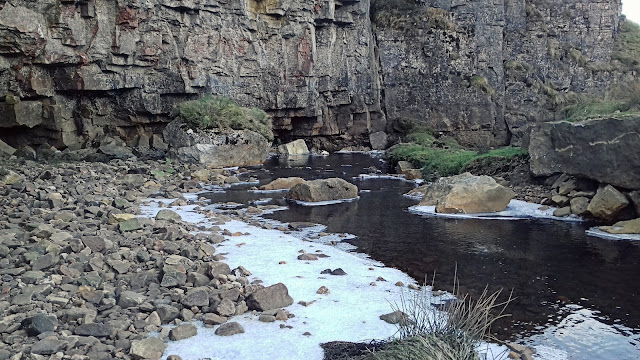 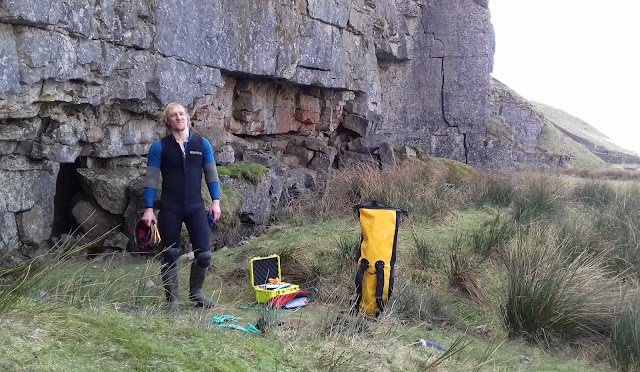 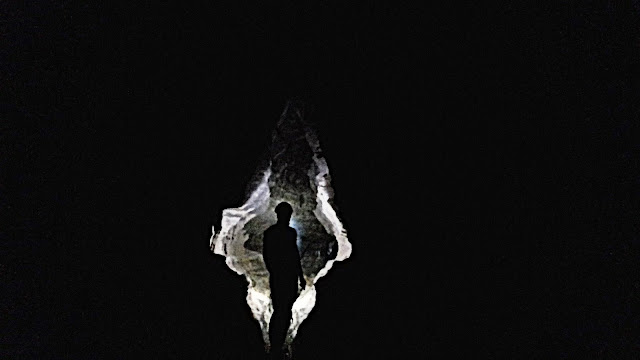 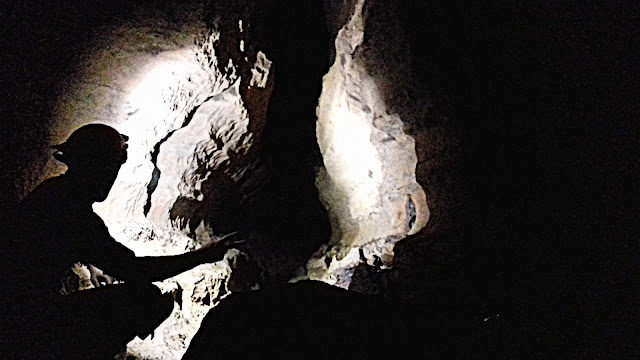 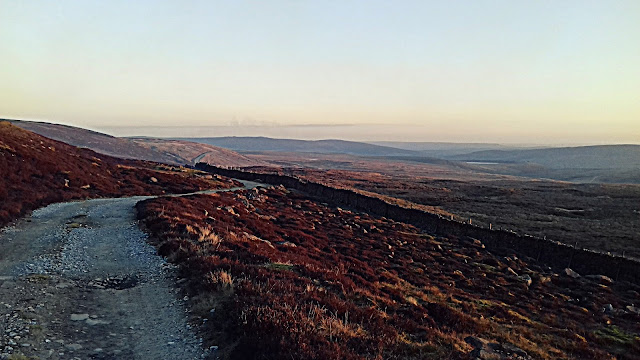 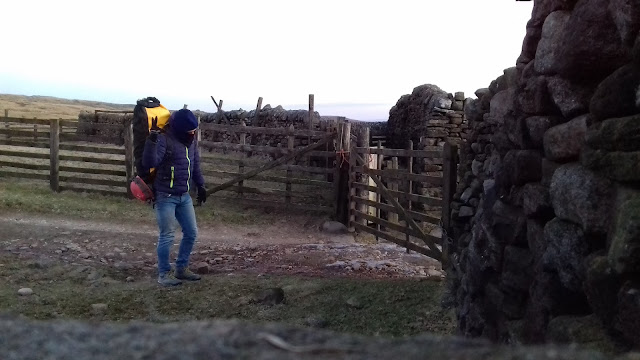 Copyright
© Simon Beck, 2018. The copyright for this article and photographs remains with the author. It should not be reproduced without permission.
Posted by Simon Beck at 16:52