'Always look on the morbid side of bright'


Literally couldn't wait for this one. Felt I was on the verge of making some real progress. Yet after two nights with little sleep I was knackered before I'd even got going.

Met Adele near the Police Station, Grassington, for the drive to Conistone. This would be Adele's first approach via this route and mine for more than ten years I think.

Glorious day! The first really good day of the year. Felt like the true beginning of this year's program.

No more Ortlieb! Bought a pristine 2nd Eurohike rucksack off ebay for pocket change. Adele was also sporting a new rucksack, but far flashier than mine, a North Face, which pretty much means it partially levitates.
Was a day filled with novel firsts really. I had the drill but no drill box. Had fabricated a temporary solution till I can get my hands on the materials to make a more permanent one.

The walk from Conistone was just what we'd needed. Why I'd not thought of it sooner. Due to much of the height having been gained in the car, Yarnbury always seemed the logical choice. The good thing with our newly acquired alternative was the fact it's the same gear all the way there and then the opposite on the way back. How long it will last I don't know. Mossdale isn't the only venue I've tramped the old route countless times to reach. We clocked 30 + visits to Howgill Nick over a five year period, myself n Rich-Gibson. It'd begun to wear thin then.

Another first for this year was my instant desire for a cold swim the moment I was in the Wetsuit. Overheating is generally confined up to the point where you get completely wet. With only 4-5mm of Neoprene, comfort can be assured for a good number of hours after that if you keep busy.
It's fortunate the draught at the choke isn't too severe, if it was like that of the High Level Mud Caverns, I'd be cold and despondent far quicker dressed the way I am.

The Swims are beginning to reflect a little of the surface weather and changing season. Warmer water and humid air. They're definitely fitting of Winter. The cold water goes well with the grim surroundings. Where as in Summer, it's likened to a Hot Tub in an Abattoir. It just doesn't feel right but certainly feels pleasant.

With the temporary drill bag being far from 100% water proof I was careful not to get it too wet. So couldn't enjoy a good swim. Water levels were finally beginning to come down a little as well.

First we visited Syphon Passage where work has begun, although the pumping side of the operation is on hold for the time being. While other avenues are explored.

The previous days lack of sleep was felt as we headed back down Straightway. The first 100' of Ouroborous could hardly be classed as nails, but it is still awkward, especially when tired. I've reached a constant where it's never really gonna get any easier, or harder. Today it felt like a twat. It's the cost of burning the candle, not at both ends, but throwing it in the furnace.

Adele had a few jobs to complete in the Depot so I left her to it and headed for the Choke.

A complete re-survey of Ouroborous is on the cards for this year. I'm about to begin this at the working end soon. Having something to build on for the time being, as we progress, is more important than the whole, which is something I do hope to complete and extend back to the main passage. Making any definite plans or promises is not something I want to do. Who's to know what will come to pass. Mossdale & Plans don't mix well. The moment you make definite plans with the place, you end either disappointed or taking unnecessary risks. The tendency to stick with the plan happens more often than not.
A completely flexible approach these past years is what helped me begin to enjoy it again. I've decided not to break from that or change anything at all.

The work session today was relatively short. Capped one of the Boulders earmarked last session and managed to man handle the other one up and out. The floor of the cavity appears to be a false one, which is good news. Holes were appearing and swallowing debris as I worked. Digging it open will not be an easy task with so little room, but necessary to find a way on. At the present floor level, bulldozing my way through large breakdown, that's spilled down from the Northerly apex of the cross/choked rift above, would be necessary.

Adele visited me briefly but made her way out as I signaled my own departure. I'd not felt the drill was justified while packing up, little did I know how tired I would be, I was just thankful I'd a far easier mode of transporting it.
I found Adele inspecting an area of breakdown, before the squeeze back to the main passage. This region had been quite the deluge, compared to usual, the previous session. There's no mistaking it's a window to the surface. The air in this sector is always very fresh. I've heard the prospects of Ouroborous dismissed in the past, because of signs a surface connection is nearby, this particular connection to the surface is no doubt the source. The base of this feature, where it intersects the entry series of Ouroborous, will be washed clean during floods and deposited downstream. Disregarding this site based on such evidence shows a lack of scope in my opinion.
While digging out the upstream end of Leakeys Marathon last April (2017) I came across numerous very fresh, and very much alive worms. Not to mention innumerable other encounters with surface borne creatures in the past. A determined looking caterpillar was encountered in the North Easterly branch of Oomagoolie during Mossdale Session 2, 2017.
I was also witness to some incredibly strong downwards draughts the previous summer. I've probably mentioned this before but have always had a hunch there's some big stuff to find around Broadway/Easy/Middle/Straightway Passages. The feature I found and dubbed the 'Speakeasy' last year, which didn't appear to have been entered for a very long time, still requires further examination. If such a thing exists this may connect with it.
The section of cave around Easy/Middle Passages and Straightway is a very concentrated area of interconnected development, especially at higher levels via prematurely developed joints. The draughts in question may purely be connected with all these. There is still a lot of little stuff to find within the realm of the presently explored cave.

Felt so shattered the exit was guaranteed slow and hard going. All I could do was dream about the chocolate fingers in my Rucksack.

A glorious evening met us on the surface. Getting changed was heavenly compared to those brutal winter experiences. 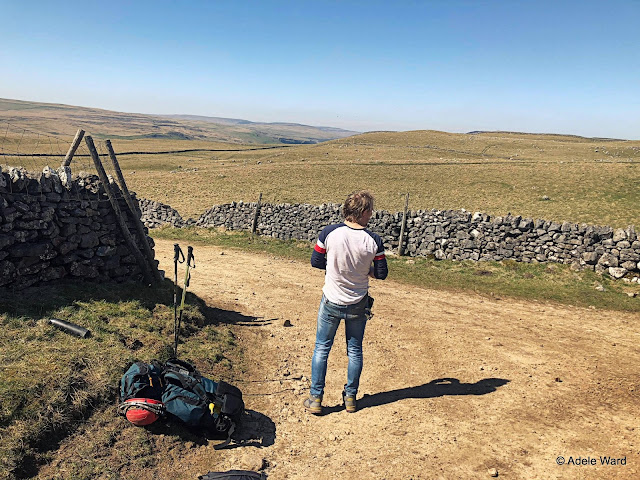 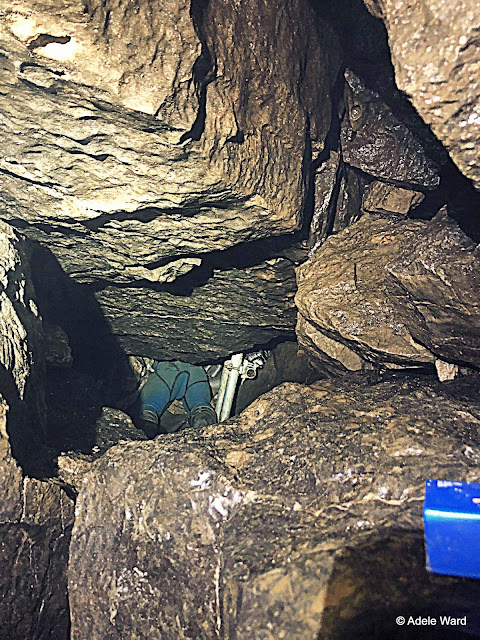 'A companion tends to fill those lurking voids'

I'd planned for a really early start, but hadn't expected to keep it. The forecast thunder storms later in the day were doubtless responsible for me jumping out of bed as my 2nd alarm rang out at 6am. I still managed to waste an hour doing very little towards the day. Tried to buy sun cream en-route to Consitone but had to do without. Stopped at 3 garages! Is this common or what!? Why Spar in Threshfield, a tourist hotspot, at the beginning of the season, lacked it on their shelves infuriated me at the time. The member of staff I asked looked at me like I was an idiot for expecting them to have such a thing in stock.

Come 8:30am and I was slogging up the track out of Consitone. Kept a decent but unhurried pace. Trying to look after my body a little better. The existing route with it's ups and down and diverse range of terrain was taking it's toll, especially on my knees. This change of approach does feels very refreshing. One of the horses in the top field came to say morning.

The forecast was to break with some possible thunder that evening. I didn't feel too pressured by time, especially at that hour. My aim was to be back on the surface no later than mid-afternoon, if not sooner.

I woke in a panic at the back end of last year, due to a dream that related to the Session write-ups. I'd been re-reading them and was horrified when I realised I'd repeated myself 30 times! It's definitely a reflection of how I sometimes feel, that a lot of it is unwarranted, and my efforts don't really justify all these words. The Sessions are more about the journey my mind and body makes than they are about cave exploration. If I get to a hundred sessions and I've only gained a few more metres, so be it, I will still continue to spew this shit out.

I was underground for 10:15am and arrived at the Depot for 11am. The drill bag is without a doubt easier. There must be two dozen restrictions along the way, where the box was awkward enough to negotiate, that an alternative was inevitable. The beauty with the box though, was the care free, throw it all in and forget about it type attitude. Plus it floated nicely on a leash through all the wet bits.

The first hour of the work session was spent purposely inspecting things to see if I'd missed anything. Mainly the stability of the blocks that formed the edge of the cavity I now had access too. I'd been eager to begin breaking up the floor when I arrived, but forced myself to at least have a good look first. I noticed a few important stuff I hadn't prior.
Some scaffold will definitely be necessary. Keeping this minimal and still allow space to work was the one element I pondered mostly.
The voice telling me to tread with caution was louder than usual. Minimizing the unexpected needs to be my chief concern. This appears to be something I jettison whenever the urge takes me.

I'd set a time limit of two hours at the working end, maybe three if things were going well.

Things had not been going well by the time the first hour of noon had passed and gone.

First I'd got 5 sets of plugs and feathers stuck, followed by a further series of mishaps. I decided not to tempt fate and packed up to leave. Instead of a clean slate next session I now have these issues to sort. 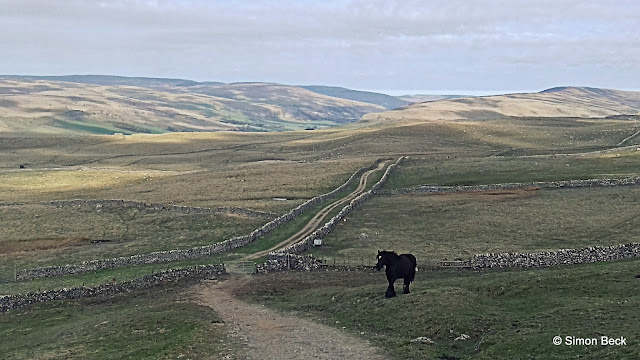 Copyright
© Simon Beck, 2018. The copyright for this article and photographs remains with the author. It should not be reproduced without permission.
Posted by Simon Beck at 18:52