Finally No.50!  A session postponed a good few times over the previous weeks.

50 sessions in 14 months and a few weeks. Must be one for the record books, regarding attendance at this venue.
When you add the overland journey to the Scar, about a 6 mile round trip, that's some hiking as well, and rarely without a noticeable weight on my back. I think the last time I spent such a concentrated amount of time with a big rucksack on my back was in my early 20s.

During the previous two weeks since Session 49 I'd partaken in a little further sport caving. Langstroth Pot pull-thru was done on the 8th with Ian & Adele. This was a day when the weather was fine for Mossdale. I hadn't felt I was needed on this one, more like a fifth wheel, so regretted going.
On the 10th I did Dowbergill Passage again with Adele, in good time as well, just before a thunder storm swept over Coverdale and the Kettlewell region. Adele drove back via the former and couldn't believe the carnage. 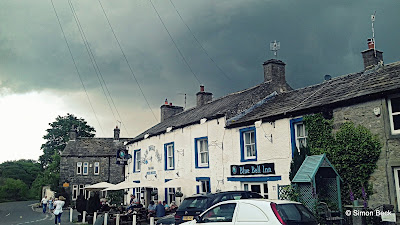 The forecast for the coming period looked horrendous. I really did wonder when I would get properly going again, and then it arrived! Appearing almost out of the blue. What was to come would make my previous Mossdale activity pale in comparison.

Late start. Had to stop off to borrow some gear en-route, which lead to a domino effect of faffing.

It's been more than two weeks since I was last here. Two weeks of frustrating volatile weather, that for the most part I couldn't risk.

Had to surmount a few psychological obstacles on the walk over. Been slowly getting lazy and soft again. Part of me was already looking forward to getting out and home before I'd even started. No pity was spared and the only advice I could offer was 'You're fucking stuck with me mate!'
I reminded myself that this is pretty much my life at the moment.

Once I'd got underground, christ! Everything just fell in to place. Like I'd never been away, or like it was the most novel'less of daily processes.
During the trip to Ouroborous I used only one light on it's lowest setting. This guaranteed the whole trip there was surrounded by blackness. Was trying to toughen my mind back up a little. Looking ahead only and fighting the urge to do otherwise is very good mind control training.

Had the drill with me and a capping bit from Hucky to replace the broken one.

Contrary to what I'd expected, there were zero signs the cave had flooded at all over the previous weeks. All the foot prints and trails in the lower sandy sections were all untouched. The thunderstorm from the 10th must have just missed the catchment, which I'd partly observed as I drove home that day.
I didn't dwell on the fact I'd missed plenty of opportunities over those few weeks, but it did occur.

Visited the bottom of Leftfield Deep first job, to make the boulders I launched down last session a little tightly packed. I also re-measured the depth, just over two metres. All that work for a few metres, albeit it could have gone for all I knew at the time. I think this was the last time I ever ventured down there again before filling it in. Probably the last time man would ever occupy that small space ever again.
I then removed the final piece of scaffold, the base jack, from a safe distance above. As I'd suspected the block I'd felt/seen slip slightly had been supported by it.

As I sat preparing myself for capping I experienced a huge burst of wind in my face! There is so much anticipation in the air down here, even without the draught!

The 1st half of capping produced very little success. #2 appeared indestructible. The capping pin then jam and parted company from it's epoxied housing. The situation wasn't hopeless, I managed a bodge repair with some other bits.
Increased the charge slightly which seemed to do it. Every one was a success after that even though it took an age to chip away at that mass. I reduced the block to half it's size before my only drill battery, in attendance, was depleted. I was also running out of steam by then.

The route ahead was already more spacious and accessible. I did consider leaving #2 at that and supporting what remained, removing it completely will for the first time offer some real space to work and proceed further. Something I have had little of up to press.

Cleared out the broken off chunks from the floor of the rift ahead. I then had a prod with the pinch bar which revealed it to be a false floor with a black space revealed below. Further excavation revealed a slightly larger channel heading in the right direction.

Not bad for the first proper session at the new route! Things turned out far better than they were looking in the beginning. Need to bring more plugs/feathers next time in case I break my only bodged capping trigger.

The air in Boulder Hall was very clear, either of particulates or moisture, there was so much clarity in the overall landscape there. 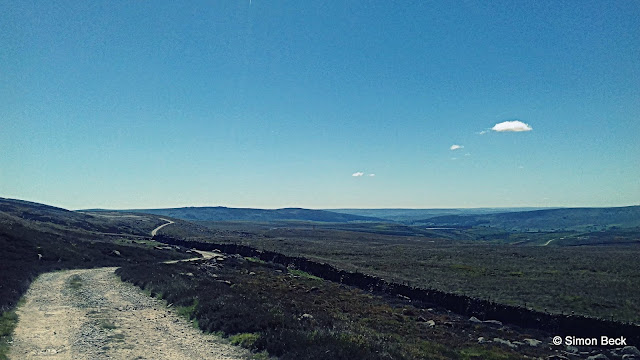 'I remember someone once asking me why? All I could summons at the time was, 'To humiliate the competition!'

My 51st session on the 51st anniversary. Not by design and not realising the significance till later in the day.

A large gathering of those wishing to pay their respects were gathering at Yarnbury when I arrived. I was accosted by Mick Melvin as I crept past for a few pleasant minutes of chat.

Forgot to dry wetsuit gloves which were still in the drybag from last time. I stupidly decided to still use them, so had cold damp hands from the get go. Not good! Should have just gone sans gloves till I stuck on my dry pair at the working end. My left hand began to go numb partway down Ouroborous and remained uncomfortable in use and touch for the remainder of the day. Symptoms felt similar to those felt after a day jack hammering, chiseling/grinding pointing... white finger etc..

I managed to finely put my finger on a feeling I've had for some time now. I was just exiting Fossil Chamber on the way in and realised what it was. Pure satisfaction with what I've been doing. All those years of ludicrously intense sport caving and I never came anywhere close to feeling like this.

Started capping immediately and got the firing pin stuck almost immediately. Had to use the plugs n feathers to free it. Bastard of a job! By that point spirits were high and after a few more mishaps the block was finally defeated. All the bits were thrown down the now Leftfield Dead. Not bad for two sessions.

Cunning use of a base jack and a couple of supporting tubes were then added to the base of the A-frame to support the death from above.

My diary reads; 'Things have fallen in to place in fucking exceptional style!!'

Decided I'd done enough at that point even though there were a few caps left in the battery.

Took some pictures and captured some video.

Excavated a little more from the rift slot ahead and below. Just to see what the next session holds. More capping of a block which bars access to the slot proper, but mainly cobble/debris removal. A current of air could definitely be felt via this route since excavating the false floor. I couldn't tell whether I was seeing things, but there appears a definite black space beyond the rift slot. Fingers crossed for the next few!
Reminded myself to take my time and becareful. Can't afford anymore broken fingers or worse.

Was a relaxed but tiring exit. Shocked that once again, especially on a day like today, I didn't bump in to anybody else down there.

Homemade rice pudding on the surface was very well received! Watched the doomed trout for a while in the Beck, then headed for home. R-Gibson was waiting for me at Yarnbury. Another cracking day! 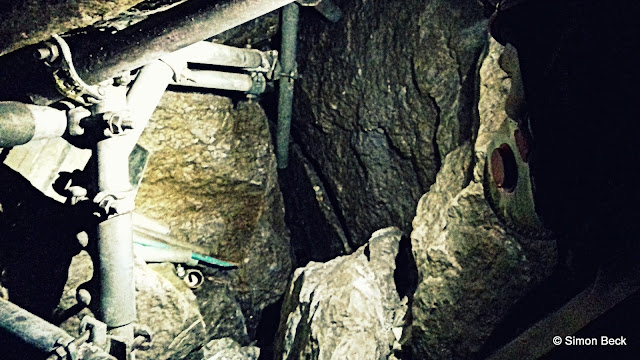 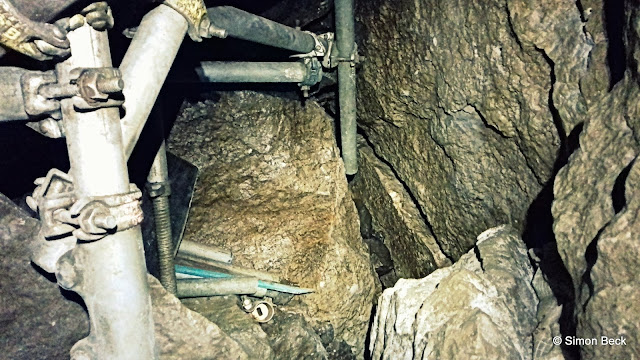 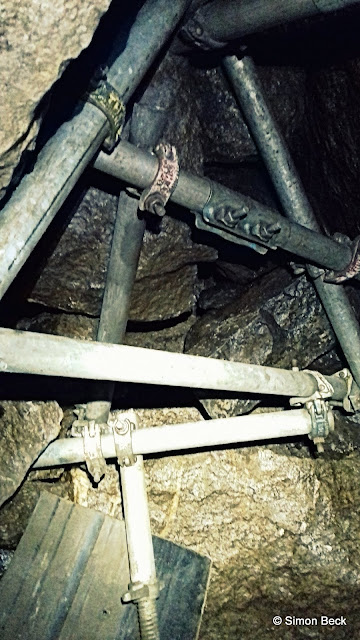 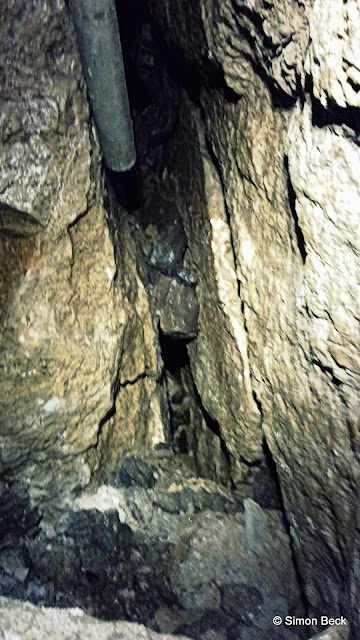 Copyright
© Simon Beck, 2018. The copyright for this article and photographs, remains with the author. It should not be reproduced without permission.
Posted by Simon Beck at 17:32