Overslept a little but felt a guiltless need for that extra hour.

Met Adele at 11:30am Yarnbury.
No, I haven't considered the walk up from Conistone in these conditions! Seem to be walking the Downs Pasture/Kelber route more and more. It's slightly longer but far more relaxed and overall pretty flat.
The walk over also felt more bearable in shorts/t-shirt and sockless trainers.

The cold draught blowing out of the entrance could be felt some 20 feet away.

Passing awkward sections of cave day in day out slowly wears away at you and can begin to feel like a chore. Recently I reminded myself of something I used to be very conscious of incorporating during long trips when saving energy was paramount. I put this back into practice recently, which had a massive effect on my overall commute through the cave. It's pretty simple really, but surprising how often we ignore the principle. When passing sections of cave where there's a tendency to do big powerful moves and waste energy, you simply break it down into smaller less dynamic maneuvers. Obstacles that can appear quite draining even before they've appeared can be made to feel effortless with this in mind. Seems like pretty basic stuff but even I find myself overexerting to pass stuff and get them out of the way quickly.
I shared the above with Adele as we arrived at the entry point to Ouroborous, something which didn't appear to fall on deaf ears.

I let Adele go ahead at the Depot to inspect progress before I started work. She also climbed up the cross rift, for the first time, to the half way ledge, below entry to the 'Early Starter'. She chose not to proceed further. It does look a little lethal.

First on the agenda for capping was to shave a little bit off the far nose of #1 block. It was undermined slightly at the end I would be working under and I was worried it still had some settling to do.

First problem was when I found out, both my 6mm pilot hole drill bits, were badly worn and absolutely useless. One was almost brand new and appeared fine the previous time. I use these mainly to save power and the more expensive bigger bits (8.5,10mm) from early wear.
I managed to make do with the 8.5mm bit on it's own, but it could've been a non starter had there not been plenty of life left on it. Bad call not buying anymore!

At one point during the session I took the first ever picture looking in the opposite direction, back towards Adele, sat within the confines of the cage. 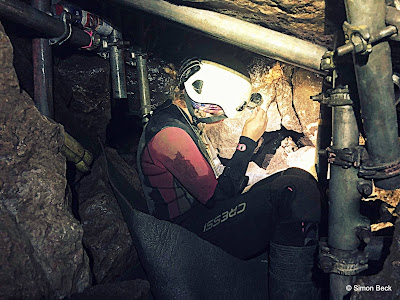 Once #1 Block was sufficiently dealt with I set too, on a very large block, which barred access to the choked rift slot. Really really awkward going this one, everything about it's position made it so. After a good half dozen or more charges, there was just enough room to slither down, enabling me to just about dig out the floor of the rift slot. At this point I commented to Adele there was definitely a larger space beyond the rift.
Took my helmet off which allowed me a far clearer and unobstructed view. 'Holy Shit! It's undercut on the left side! I think it's passable!'
Because of the angle I'd been at previously, the left wall of the rift slot had been well out of view, but was completely undercut on that side. Without the removal of previous block I could never have got down enough to see.

A minute later I was through the slot, to a slightly wider continuation which then lead to a short climb down to a chamber. The fact I'd expected a fight to get through this section made this situation all the more surprising.
I deemed it was pretty safe so called for Adele to join me, which she did moments later.

The chamber was formed between huge blocks, with a sloping floor on a bend leading to a pitch, which at the time I thought was about a 3 metre drop. The slot down was way too tight to attempt to pass, a block requires some shaving off, or removal, to stand any chance. Investigated the other leads which all lead upwards, all blind to sections of mud, loose boulders etc..

Even at the head of the pitch I reckoned I was at least 3 metres below the sandstone up passage. We were definitely, in a stratigraphic sense, at lowest point in the cave, especially down the section to come.
Although at least one person as partially questioned my claim, I think this is the most significant step forward in the exploration of this cave since it was first discovered and explored. Sections of passage have been discovered since, but nothing of huge significance nor anything that's broken through the strata like this.
I never started working here for the potential of a few hundred metres, but more a few kilometres, at least.

Had a think about what was needed for next time then made our jubilant way out.

It occurred to me during the exit that this could have come to pass very early in the year had I not begun to excavate Leftfield Deep. Fact is, I'm glad I did waste all that time with Leftfield. It showed I was determined enough and willing to put in the hours and effort. I grew a lot, learn't a lot, and realised I really didn't need that strength in numbers so many had claimed it would require. I barely moved from the same spot for more than 10 months. Had I made this breakthrough as early as I could have done, I would've just appeared lucky.

We literally floated back to Yarnbury that evening. 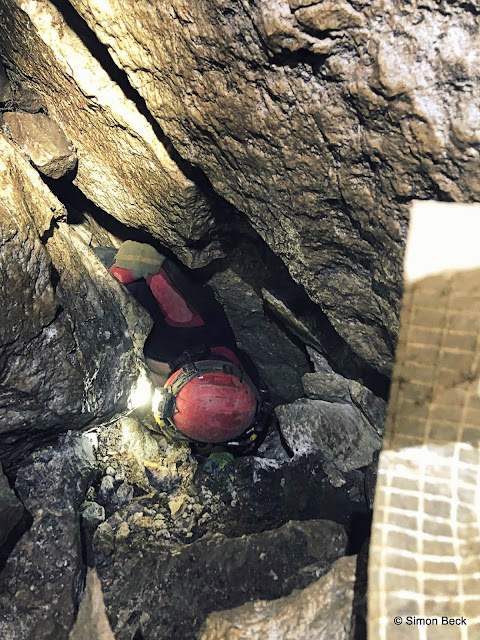 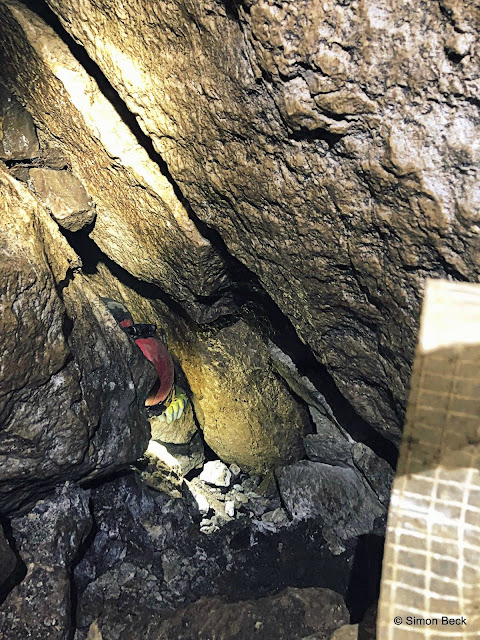 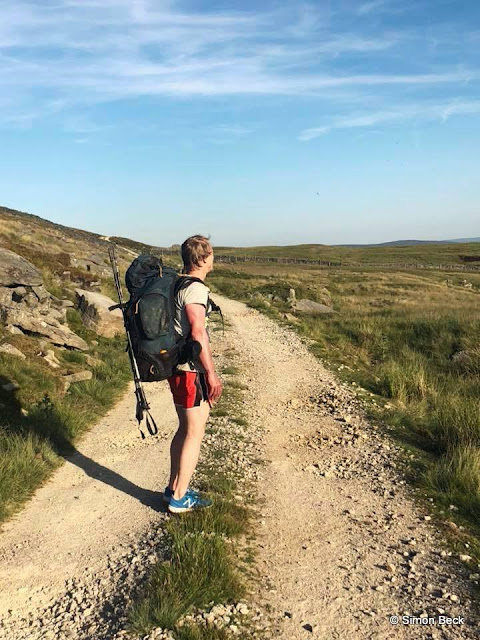 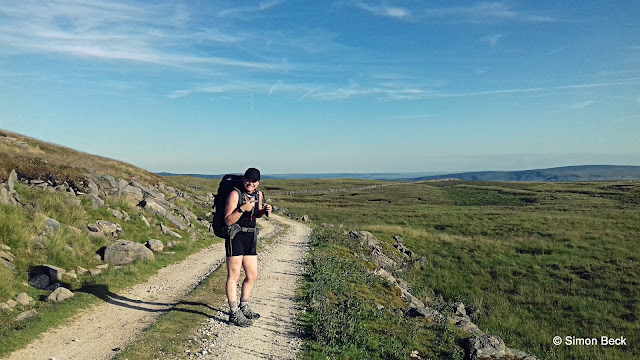 Copyright
© Simon Beck, 2018. The copyright for this article and photographs, remains with the author. It should not be reproduced without permission.
Posted by Simon Beck at 22:52