'Hindsight holds all the wisdom, what comes before is guess work'

After five weeks of remarkably stable conditions, the weather was finally due to break later today.

A short working trip was planned initially, 3 hours max etc, but this got scrapped due to a later than anticipated start, and an ever threatening forecast. The work I had to do just didn't seem important enough to justify the risk either.
If I did find trouble where I presently worked in the choke, stuck due to collapse etc, I would be right in the firing line should significantly-wet conditions arrive.

With the above in mind, I had more than enough excuses to call it off, but still felt it was important to make an effort when there was little reward.

'Real gain comes from doing things when you least want them'

I'd manufactured some more high water markers during that period, so decided enough justification could be gleaned from placing them.

Arrived at the Scar around mid-afternoon, and about the time rain was originally due. It still felt a good few hours off at that point.

In my haste I'd forgotten two of the three water bottles prepared. Meaning one litre of juice was all I had throughout. With only a short visit planned I hadn't been that concerned really. The walk over was one of the most debilitating I could remember, under incredibly humid conditions. The litre of juice was long gone before getting underground, even when well rationed, which is where fatigue quickly began to take hold.

As is usually the case with visits close to the arrival of bad weather, every element within the cave appears tense with anticipation.

Two of the high water markers were placed in the vicinity of the 'Serpent' and the third part way up the slope leading to the 'Speak Easy' in 'RH Passage'. The third was placed roughly 2.5 metres off the floor in a section of passage that can be ascended for around 8 metres. Because of the large capacity of cave passage beneath that level, and within that section of the cave (between Broadway and Rough Chamber), I've deemed this spot very flood proof for the type of event I'm likely to get caught out in. Short sharp downpours, but even several days of heavy rain. I wouldn't wish to experiment during one of those severe storms that lasts many more, when things begin to severely back-up.
Under my present system I think it's incredibly unlikely I will get caught out. But, with the lengthy call-out margins I maintain, and regularity of visits within close proximity to poor weather, it's not impossible. Injury and a slow exit would be the most likely reason.
You don't pull off almost 70 visits to the mid regions of Mossdale in less than a year and a half without taking more than a few chances with the weather.
Those who do my call-out have always been under strict orders not to mobilize a rescue if high water levels are suspected to be the cause of my delayed exit.

With the markers placed an uneventful exit then followed.

Still felt like a wasted visit as I made my exit, even though there was at least some tangible result.

With a pounding headache and the lethargy of severe dehydration, the walk back was slow. Thunder clouds began to gather at a remarkable rate and finally unleashed their fury as I reached the car. What came down was very heavy but only lasted about twenty minutes. Barely enough to produce any effect I reckon. The fact remains, it is only with hindsight the end result of that fearful looking sky was known. 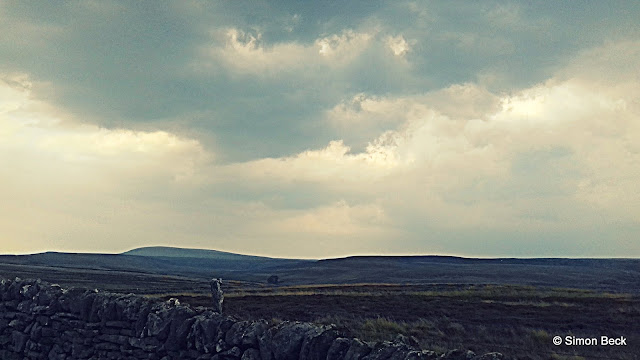 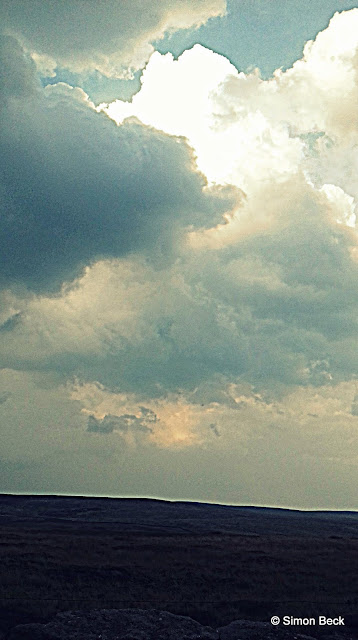 Twelve days since the previous visit. Another pause from Mossdale activity that seemed far longer than it was. Gave me some time to think things over, though more than I would have liked.
One job I'd managed to complete during recess was a considerable amount of wetsuit patching & repair.

The plan today was to re-inspect every inch of the extensions in case I'd missed something. I've again invested quite a bit of time in one spot, in this instance the Alley Cat series, and although I've made good progress and things are not quite terminal there, further commitment at this site requires I write off everything else for definite first.
I knew by this point it was wise to keep an open mind. I hadn't forgotten how quickly, after breaking through, I'd begun work at the lowest limit of the choke, and cast all other possibilities aside.
Strangely, during the layoff, I totally convinced myself I was going to find something I'd missed during the initial quick inspection.

Arrived Yarnbury around 11am to a crappy looking sky and not the best forecast only slightly further north. The rain was due to miss this part of the dales, but even if it did, I felt I'd be in and out before it had time to take effect. At least two friends I spoke to afterwards were very surprised I'd gone down there that day. Even though the visit was longer than intended I never felt much of a chance was taken.

My movements during entry felt awkward and laboursome. I was wearing one of the repaired suits, which was stiff as a board after a long period in storage. I should really have washed it but couldn't waste my impulsive urge to repair, waiting for it to dry.

High water marks were pretty much what I'd expected, unremarkable. Signs of a burrowing mammal were noticed in Blackpool Sands. The Swims were particularly unpleasant though. The murk had returned for the first time in months, a norm for most of the year, but the main offender today was a thin layer of scum accompanying the whole of the 2nd canal. It didn't look like the usual flood froth you see here, which is fairly easy on the eyes.

First port of call at the choke was to inspect my previous efforts in Alley Cat, from Session 66. To recap that session: I'd written off the 'Little Shop of Horrors' and made 'The Pot' (within the 'Fluted Cavity') a little easier to access. I left Session 66 having drawn no definite conclusions about The Pot.

As I'd predicted, there was a lot more seepage dripping down in this region. The breakthrough to this section of the choke was made part way through a long dry period, when seepage from above had fallen dramatically. It's fortunate I made the most of that dry weather to work here cos today working conditions were miserable. I was cold far quicker than previously.
The seepage had also washed away most of the mud from the floor of the Fluted Cavity.

Further excavations were then undertaken in The Pot. Mostly jammed boulders to allow me a better view down the western end, which offered nothing. I then switched attention to the other (easterly) end, briefly, and noted the pot bent round to the left. Even after making more room I couldn't wriggle in enough to see round the corner. Enlargement of the feature would be required to make any further progress there. I decided then and there to look for an alternative before resorting to pushing this miserable spot any further.

Great frustration comes from knowing there will be an easy way on somewhere. At that point I'd accepted it would be a case of systematically narrowing down the possibilities.

The pinch bar came with me as I made my way back to Depot Rift to begin searching for a new way on. The search was short lived and came within a matter of minutes, as I searched the underside of the block which makes up the North Wall of Depot Rift. A feature I'd definitely inspected before. I put it down to the fact the lights on a helmet don't always match up with your line of sight and instead cast shadows where you are looking. What appeared to be completely choked previously housed a tiny gap leading to an opening beyond. A facing wall could be seen 2-3 metres away and what looked like a bend to the right of it.

The usefulness of a hand torch when searching for ways on can not be overstated.

Work began immediately excavating a slot under the North Wall. Without the tools, work would have been very difficult with just hands. Heavily compacted cobbles/mud and layers of clay were painstakingly removed until it was possible to wriggle in a little way. A stone thrown awkwardly ahead could be heard falling down for several seconds. At that point efforts were increased with a view to passing the obstacle that session.
Some excavation of the rock on either side had appeared necessary, but further digging of a narrow notch in the floor between the two, gave hope this may not be the case. After several hours of incredibly demanding work - which had required the undermining of a boulder, which could then be laid flat, enabling a very tight squeeze over the top - I was able to see down through a small window, between a bridge of boulders, to a pitch and a definite continuation. At the time it looked about 5-6metres deep down very solid looking clean rock.

After more work and further desperate attempts to get through I accepted it wasn't going to happen today.

The exit, which after a session like that should have been absolute hell, was actually quite pleasant, offset with the days discovery obviously. The only thing that haunted me now was my eagerness to return as soon as possible. The weather looked to be taking a major turn for the worst by the end of the week. 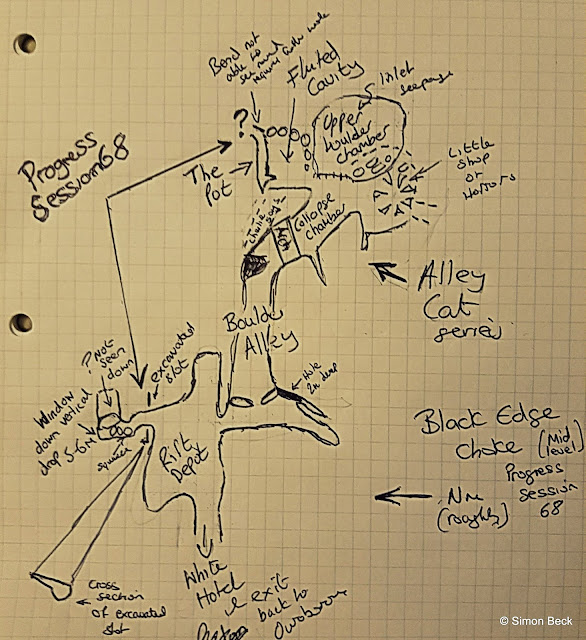 Copyright
© Simon Beck, 2018. The copyright for this article and photographs, remains with the author. It should not be reproduced without permission.
Posted by Simon Beck at 20:25