'69 reasons to justify never having joined the club'

After Monday's visit this was shaping up to be a very big day. Of course it might not be wide open at the bottom of the pitch. But at that point the fact remained, it-could-be. The cave is the one making this up as I go along after all.

The weather was all over the place the previous days, which is why it took me three to return. This was definitely the last opportunity before the weather broke for what looked like an indefinite period.

If I had the choice I would not have chosen to do this session alone, but there wasn't any option. I've wasted too many good days as it is, and at this point, especially the time of year, I can't afford to waste any more.

Had I not gone today, three weeks would have gone by before I got another chance.

Overall it was a very strange lead up to this one. So much so that by the time I left Yarnbury, the expectation of what lay in store commanded quite a presence. Even in the sun I felt constantly in the shadow.
A further bizarre spectacle came via some very odd behaviour from the weather.
With a forecast of cloudy weather but no rain, I witnessed a huge shower sweep across the landscape ahead, as I made my way across Kelber for the Bycliffe Road. With the light that day it was a spectacular sight and crossed Wharfedale valley then Great Whernside to settle over the catchment. 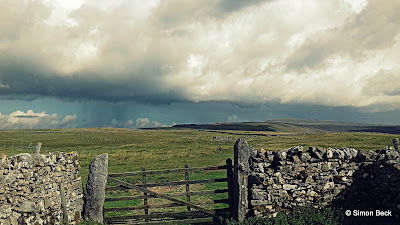 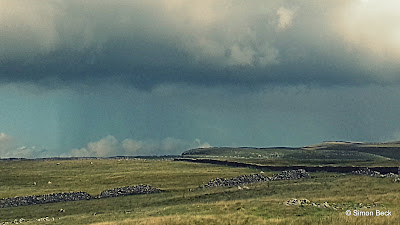 Earlier in the approach I noticed a towering Nimbus near Pendle Hill. I'd kept my eye on this periodically, and as I got changed at the scar the cloud in question reappeared above the Scar. For a period of about fifteen minutes or so it discharged a harmless shower on me. I can quite honestly say I've never witnessed anything quite like that under those circumstances before.
I've found the Met Office predictions, within a period of hours, to be incredibly accurate. The fact it was wrong on a day like that was astonishing.

Even now I still can't get over the palpable gravity that day. I felt my resolve was put to the test for sure. Postponing the trip would take far more by that point. 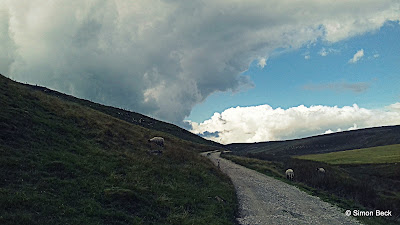 There is something about all this I will never fully understand. It's begun to make a little more sense this past few years, but I guess I will never know whether it was real or something I merely created myself. All I know for sure is, there has always been something telling me to keep coming to this place.Strangely those impulses were eventually confirmed with some startling answers. The notion it was mean't to be couldn't have felt more so. It's worth remembering things usually only feel mean't to be after the event.

With me was a much heavier load than usual. Drill + 1 x battery, light SRT kit and rigging/bolting stuff, more caps/plugs&feathers, plus snacks and other possible necessities.

Water levels slightly lower than Monday. The Swims were not quite as unpleasant as that previous visit. Still murky and grim. Set a decent marker at the Beach Head for the first time in ages. Another very accurate one was placed downstream in Broadway as well.

One of the ropes was grabbed from the White Hotel, as was the first aid kit. I figured it would be wise having it close by today. What constituted a good pile of tools also had to be collected from Alley Cat before I could begin work.

I'd expected to be through to the head of the pitch pretty quickly, which wasn't the case. More than twice the work expected was required in the end. Under very awkward working conditions. Neither capping nor the use of plugs n feathers was easy at any point. Gaining enough force with the hammer while so restricted was the main issue. A number of imaginative contortions was necessary just to fire the small number of caps I placed.
I'd grabbed a big pile of ear plugs from the last site I was working on and brought a few sets with me today. I couldn't get any of them to stay put in my ears. Under dry conditions they'd be fine but today they were useless. Considering how careful I was handling them it must be the first time I've used that variety underground. This mean't I went deaf, and on a scale of 1 to 10, somewhere in the region of post Motorhead.

Mid-way through the enlargement process I did manage to squeeze in far enough to look down the larger right hand side of the shaft. The drop seemed a lot deeper than I'd originally judged last time, when I looked down the left hand side via a small window. This was now filled with crap and boulders.

Had the squeeze exited to straight passage it would probably be passable very early on, but due to the route bending round to head of the shaft, post squeeze, it mean't your hips hadn't quite made it through the dogleg part of the squeeze when they needed to begin following the trend.

After more awkward work, by that point frothing at the mouth, I eventually made it through, and was able to sit atop the dubious boulder bridge. The dimensions of the shaft head were about a metre long and half wide.
The depth of the shaft appeared no different than earlier and I judged it to be about eight metres or more. The most embarrassing thing is the fact it was barely more than half that.

Looking around there was loose that needed taking care of before I could think about the rigging side. In the roof of the shaft were two questionable hanging boulders. I couldn't risk ignoring these, knowing full well if they went they'd probably kill me outright. The quickest solution I could muster was to install a basejack and cross bar. A return to Alley Cat was made to grab the scaffold bits needed, feeling by this time absolutely worn thin.
The installation in the shaft head was far from bomb proof but enough to offer some assurance should they shift. Further loose was dealt with before returning to Depot Rift for the drill and bolting stuff.

Now, I will admit the installation of two spits was completely un-necessary, but at the time I never once questioned my decision. Had I come a cropper and injured myself, I would have been stuck in a cave that was soon to be inaccessible for the next three weeks. This last statement obviously comes with hindsight and never crossed my mind at the time, nor was it justification for the act. I was tired, shaky and under no pressure to prove anything. Plus at that point I still had something likened to beer goggles on regarding the pitch depth. Still if I visited today I would probably say 'which dickhead felt it necessary to place two bolts when it's easily freeclimbable!'

Installing the spits took all of five minutes, the quickest task by a mile that day.

While installing the first, a crack to the side of me spilled forth mud and a toaster sized boulder which I couldn't believe I managed to catch. There've been a few of those so far.
Things had felt out of control that entire session. Like I was winging-it a little more than usual. Believing nothing bad will happen to me in order to progress quickly. I've long justified this to some extent as a way of getting things done within the parameters I've set.
I've always said I don't care if I didn't succeed to make a major breakthrough. But that doesn't mean I'm treating this as something I have all the time in the world to pursue either. For me it's all or nothing right now. It's the most futureless I think I've ever been in my entire life.

It was while rooting in one of the bags for the descending gear I sliced the end of my finger, between the nail, on a blunt rusty hacksaw blade. I treat this injury with the same contempt I was treating my health & safety that day.

'Ignorance is a virtue'

I still can't believe I installed my belay device on the rope! But at least I can admit it now. A moment after lowering myself down, the true proportions of the shaft came in to focus. 'Christ! You twat! You'd jump down something like this in Dowbergill!' The words that followed were along that vein.
I'm not sure how long ago it was but there came a time on this project when I completely ceased mental communication in favour of talking out loud. Generally all I had to say to myself was downright disgraceful foul language.


The pitch dropped to a jammed boulder, where the rift extended out slightly back under, what was now revealed to be a boulder arch. A side ways shuffle allowed a further descent to land in a small boulder chamber. Where I found I was still within the choke. The fresher air was very noticeable.
Before moving from where I sat I made several attempts at filming the moment and saying something. I couldn't really fathom the words to be honest and was about ready to call it for the day.


The way on lead down through a small arch, that required a little digging, to another chamber and a devious looking rift continuation. A climb up over a mud bank was necessary to access the rift which housed a wonderful fortress of drip mud spires. Had I known how long it would be before I could return I would probably have pushed on a little further that day. But still had packing up to contend with and returning to the surface. Which at that point felt that bit further away. I also had a far narrower call out window than usual. The nature of the work I knew I'd be doing that day dictated a long call out margin was unwise, should I sustain a serious injury. I still took some convincing before I agreed to it though. 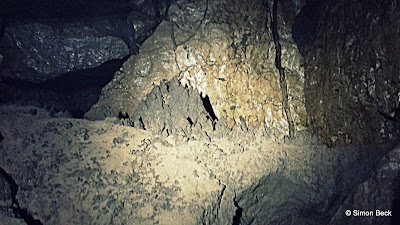 While packing up in Depot Rift I was reminded of the fact it's still only six weeks since this part of the choke was first entered. It felt so alien at the time compared to how familiar it was now. More was added that day, yet it felt purely, all just a part of the process. This region of Mossdale was now a little longer and deeper with more to explore next time.
My diary doesn't go in to much detail about how I felt at the end of that session, and I don't remember. I do know, that as I made my way back to the surface, I would rather have been making my way back in as opposed to out. I'm just glad at the time I'd not known how long that wait would be. The intensity of that days efforts will take some beating.

Copyright
© Simon Beck, 2018. The copyright for this article and photographs, remains with the author. It should not be reproduced without permission.
Posted by Simon Beck at 19:35