Three weeks is a long time spent tapping fingers. Considering I managed only two further visits (70-71), with a few wasted opportunities, returning to work would have been wise. Instead of hanging-on with little gained and the previous months worth of prowess lost.
I won't blame the met office and their purported 2nd heat wave, I take only short term forecasts at face value, but couldn't help place hope in their claim.

I was here at the scar earlier in the week, but found an excuse not to descend in high water. I couldn't be sure the Duck was passable, and felt too lazy to kit up and find out. Three weeks of wayward living had done it's damage. Feebleness and the knowledge it would be grim-as-grim is a better excuse.

Managed a good early start and swift approach, arrived at the cave for half nine. Water levels had dropped a lot but wouldn't have stopped me today even if they hadn't.

Physically I felt ropey but my head was there from the get go. Feeling stiff may have been my choice of wetsuit which appeared to have shrunk again. It started life as a size 40, and is now smaller than my 38, which also shrunk enough I now can't keep the zip closed. Sizing a Warmbac correctly could best be described as a perplexing waste of money long term. It wasn't always like this but I guess times change. Maybe something more sinister is going on and they are trying to dissuade cavers from wearing Neoprene altogether. It's hardly fucking Ivory though is it! But you never know. Scorn appears to have been cast our way for wearing them in the first place for as long as I can remember.

While traversing the entrance series, it occurred to me, that by the end of that session I will have passed by there 140 times in the past 17 months.

No signs of exceptional flooding, which even I found surprising. Most of my footprints around the Blackpool Bar were still there.
The 1st Canal was extra grim, with a layer of froth the entire length, making the step-up to the Diving Board harder to judge. The rest was to be expected. One thing I never noticed was the temperature of the water. Which was obviously quite warm.

With the increase in flow, things felt back to normal.

'Unprejudiced raindrops making their way to the bottom'

I checked a few of the lower 'high water markers' but knew from the footprints in BS that levels had been nowhere near that height.

Before heading to push the open stuff I was tasked with catching up on the survey front. And doing as much as I could until I got cold. I'm now suffering for having neglected this task. When I should be pushing new ground I'm wasting time doing something long overdue. Even ten minutes every visit would have seen it completed.
The survey was begun where I'd left off last time with Adele, when she'd begun to get cold almost straight away. Her choice of wetsuit at the time, decidedly thinner than mine, scuppered my plans that day to complete what required mapping.

One must continually adapt as and when necessary. While working the Alley Cat Series I came close to accepting I needed an oversuit, to compliment the neoprene. Had this started to affect progress, I wouldn't have hesitated to make alterations.

The way I see it is this, it's pointless investing all that time, walking/caving to and fro, to not get something worthy of that effort completed on every visit.

I would say 90% + of the work at the choke was done on solo trips. When an hour working by myself was likened to a whole session with company.
Work was commenced at the choke proper during Session 19 (13th Aug 2017) and of the 53 sessions since that work started, Adele was with me on 18 of those.


When you are the one doing all the work, and sharing the rewards with someone who isn't, it goes without saying that some form of effort or commitment is expected in return for the privilege.

I spent a good deal of that time, and the many visits that came before (during preparations) passing on what I'd learnt over the years, and instilling a sense of awareness and self reliance I feel is mandatory for survival in these places. Someone is a far superior caver due to that guidance and experience, compared to what they would, had they done it under their own steam.
Having had little opportunity offered during my early caving days, it was necessary to find my own way, but at the time would have given anything to have what Adele had handed.

With Depot Rift and a few offshoots surveyed, plus the route to the Pitch, I'd done enough and was beyond the point of cooling. The pitch from the uppermost bolt was measured to be 4.8 metres.
I decided it was time to invest in a laser measuring device that day. Surveying alone mean't I had to use a metal tape measure, and benefit from it's limited rigid capabilities. Taking measurements with the usual flimsy tape would have been impossible, without someone to hold the other end. Still, even the use of a compact metal tape measure had it's limitations and I was wasting time that could be saved.

I intended on grabbing the pinch bar before descending the pitch, but in my haste and quickly getting cold, pushed on without it.
With the prior limit reached in the lower 2nd chamber I carefully climbed round the mud castle and ascended slightly to a bridge of boulders. Two ways on were met.

The first, to the left, appeared awkward with no apparent way without work. This route dropped down to a muddy passage with seepage evident.

The 2nd option to the right, entered a tall rift with a climb down of roughly 2.5-3 metres. Following the rift, once down, a squeeze past a flake was negotiated, to a slight rise, and terminal chamber amongst boulders.
I suspect this is underneath the Alley Cat Series (near end) or South Easterly recess of Depot Rift. I'd felt the breeze coming up through the latter when I first broke through to D-Rift. Was the very first place I began excavating actually. The lack of seepage at the limit of the rift suggested it wasn't under the area I'd previously worked in Alley Cat.

Returning to the base of the rift a tight route to a lower chamber was discovered. The route needed excavating and lay directly beneath the questionable bridge above. This was avoided when it was noted the floor of the rift could also be dug to access the lower chamber. Both features were connected in an L shape.

Several minutes of digging and I was slithering feet first down to an even lower level. The route on continued via a tight slot, that required excavation beyond what I could manage with bare hands, to a chamber that headed back under the rift. A quick series of very awkward manoeuvres allowed me to peer down into the chamber but no definite conclusions drawn. Had I brought the pinch bar, entering that session would have been achieved. Grabbing the tools needed would have taken five minutes but decided to call it a day. At that point I assumed I would be returning the following day to continue work.

Although the survey hasn't caught up with the limits of exploration, the base of the 2nd pitch is roughly estimated to be 12 metres below the floor of Piston Chamber, and at least a further metre, possibly more, below the Sandstone floor of Ouroborous Passage. This latter estimate is based on observations made, and the suspicion, displacement has occurred some 30-40 metres back from where the choke and Piston Chamber are first entered. A significant step down is certainly not imagined along that segment of passage.

My limit that day was maybe a further 3 metres below that estimated for the base of the 2nd pitch. At this point a guess is all it is.

Pushing onwards for the time being is the obvious priority, but in the near future I would hope to take the survey right back to where the Sandstone is last observed U/S in Ouroborous.

Steady exit, took my time and enjoyed it thoroughly. Every pause brings some form of curious delight.

Once on the surface and changed I visited friends operating on the fell, via my return to Yarnbury. I made the mistake of hanging about with them for several hours instead of going home and jumping straight in the bath. I made the drive to Yarnbury the following day but felt sore enough to cancel the visit. Allowing yourself to get cold does you no favours.

I returned four days later for Session 71 and explored everything that remained from the previous session, with what appears to be the way on found. I will probably hold back my findings and conclusions made that day, and the write up, till the weather allows a return and a more complete picture. 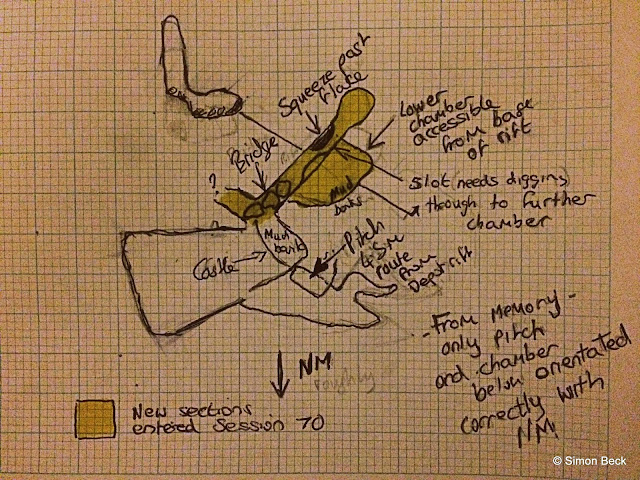