'Every session holds a silver lining'

Another long festering wait to return! 3 weeks +. Due to consistently poor weather, but nothing biblical overall. When the weather finally came good I'd other responsibilities, so had to wait till the weekend.

Visited Screwfix before hand to buy myself promised Laser Measurer. I worked with someone at Eshton the previous year, who knew someone, who believed Screwfix was a dating service.

Very windy wild walk to Mossdale! Arrived at half eleven, underground for noon. Physically/mentally felt good from the beginning, which still surprises me, after weeks of non caving. Wetsuit felt bloody tight and annoyed the shit outta me throughout the whole visit.

Lots of fresh deposits at Blackpool Sands. The Blackpool Bar (mostly cobbles & sand) continues to gain in size after every flood. I've a feeling I've briefly mentioned this earlier, but the creation of this feature is probably due to flood waters entering at the top end of Assembly Hall(NW), which then flows across the floor and down the slope - collecting debris in it's wake - to the connection point with Blackpool Sands. Where the debris is deposited in the eddy formed between that and another inlet, which comes direct to Blackpool Sands from the direction of the new entrance series. I have a picture of Blackpool Sands which I took in 2005/6 which shows no indication of this feature. Next session I will take a picture, from the same place, and share the two here.

All previous signs of passage were completely erased as I made my way towards the canals. Definitely the first visitor to pass this way since I was here last.
The first canal before Razor Rocks was again in very grim form, heavily laced with scum and froth. A good solid flow pounded it's way via Razor Rocks. The rest of Swims were murky and deep but far friendlier in appearance than the start.

Checked 1st high water marker at the Speak Easy, which held some water, but only a little. I'm certain this slope is an inlet during floods, and the source of the water markers result. This was confirmed when I checked the lowest marker at the Serpent (similar height), which showed no positive results. I will be moving the 1st marker to another location once something suitable is found. A high ledge spotted at the downstream end of Confusion Passage is one possibility.
When visits to Mossdale are as frequent as my own, signs of where the water has been are usually pretty obvious. The use of high water markers along a section I stand most chance of sitting out a flood are mainly just a way to confirm my suspicions. The results so far have been fairly remarkable considering the cave and reputation for terminal flooding. Obviously the results downstream of Rough Chamber would be very different, but irrelevant to my cause or of concern.

There were no doubts the passage's of Ouroborous had received a large flow as well. Fresh sand & silt, moorland foliage and mud stained walls were the obvious signs. Especially where the water had backed up before the choke. Piston Chamber it appeared had received non of this though. The rock barrier formed at the beginning of the choke, just prior to PS, acts like a dam, holds the water back, and directs the flow elsewhere (down to the right, probably towards the chamber beyond the 1st pitch (2.5m)). A bag full of scaffold tube protection foam, positioned at the U/S end of Piston Chamber 2 would have floated away, or at least moved if the above wasn't true.

Grabbed some tools from Depot Rift, then headed for the Notch, to begin work.

Got to work straight away, excavating the Notch, but quickly realised I'd made a mistake. The area I'd viewed beyond the notch was in fact part of the Rift, set at a slightly different angle, but not a section I'd fully explored. Inspect twice, predict once! This was confirmed when I approached from the other side, via the Rift, and got within a few metres of the Notch. The floor in this section of the rift appears false, so one possibility is to dig the floor. The picture I took during session 71, looking beyond the notch, is a good example of the possible false floor there. It's via one of these features that I feel I stand the best chance, if nothing else jumps out at me.

Today's visit is only the fourth time I've visited this section - the area beyond the 2nd pitch - and really I've barely scratched the surface, so feel there's still every possibility of finding an easy way on yet.

After the disappointment of my findings, beyond the notch, I gave myself a slap and headed to the chamber at the lowest point - first entered Session 71 - for a poke at the route onwards. Working conditions were far from pleasant down there, especially without the foam matting I could have provided for this job, from Depot Rift above. I managed a good 20 minutes of excavation work, removing small boulders and horribly cold mud, but drew few conclusions whether this section was really worth the investment. 'Last Resort' seems an apt name for the chamber and it's prospects..
Once a return had been made of the slot, I noticed there was a slight draught coming through the floor of the chamber next door. A little digging revealed a hole and a cavity below the false floor there. It was at that point I knew there was still so much to learn about this new section. Digging randomly here and there could well waste time better spent giving the whole thing a really good once over. The survey it was decided would now take priority until all the new sections, and many of those above - first entered months ago! - were mapped.

Once back in Featherstone Chamber I got to work surveying but after ten minutes I'd really had enough. I was cold, wet and suffering a pounding headache. Part of me was relieved again, that I can have a breather and hopefully complete the loose ends (survey) long overdue for completion.

Unpleasant trip out, felt rough as a dog! Temperature of the Swims was still warm but visually they were hideous!
Chilly, windy and wild topside. I did consider coming back the following day once home but that would have been foolish. Pat on the back deserved, was grim and intimidating in there. 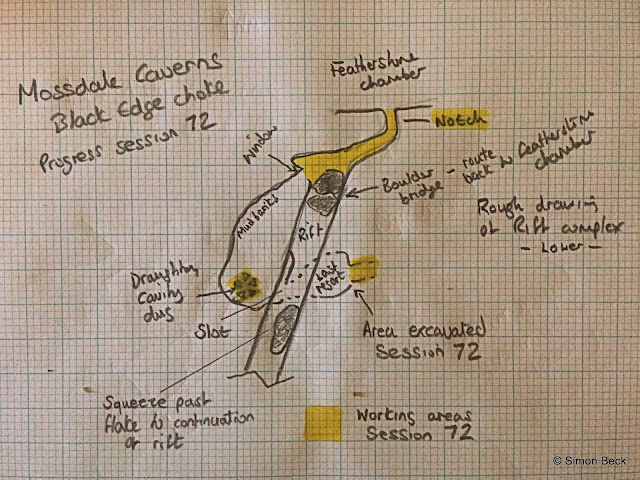