Session 71 should have occurred on Sunday the 2nd, the day after the previous session (70), but Yarnbury was the closest I got. A twitchy back and very sore limbs were wisely obeyed that morning.
Staying warm down there is very important if this type of short term damage is to be avoided. Allowing myself to get very cold is still something I can handle, but the consequences are felt far more than they used to be. Things would be far improved if I could only lead a more measured existence above I reckon, but that won't be happening anytime soon, so pointless to dwell on it, as I so often do.

Another late night and equally late start. Arrived at the scar for noon. A group out walking were coming the other way as I approached, which included a few members of the Craven. Steven Wood came over for a chat, followed by John Batty. The latter I'd met at Howgill Nick several years earlier. Steven was aware of my activities and spoke about his own Mossdale experiences.
So far this year I've been approached, while at the scar, by at least a dozen folk, some of them non cavers, who were well aware of who I was and what I was doing. The cave and the blog are two very separate things to me, even though one is just an extension of the other. It still surprises me greatly the interactions I've had as a result of my online activity. Receiving messages via email or via the blog is one thing, but it feels very odd when it takes place in such a desolate location, where human contact is a fairly rare commodity. What next? Autographs and Groupies!! A Redbull contract maybe... Not when it would ensure saying bye bye to Mr Beck in exchange for the corporate whore we all have hiding within.

'Less so now than in days past'

Underground for 1:15pm, with what my diary states as an uneventful descent, I'm not sure what I was expecting though with that statement. Considering I moved to Bradford about the same time I began the Mossdale Sessions, I've still visited Mossdale more than I have the local papershop, which should guarantee a Mossdale descent is less eventful than going for the Milk. At the right time of day the latter is probably more dangerous than the former as well.

I can just imagine my epitaph..

'Here lies Simon Beck, who survived more than a hundred visits to Mossdale Caverns only to die caught in the crossfire of a drive by shooting, while going for the milk'

Surveyed both chambers at the base of the 2nd pitch until I started to get cold. Really the two chambers are one split by a rock curtain. I've since named them 'Featherstone Chamber' (upper/lower) which I thought was rather apt considering there's a mud castle in the lower one. The name relates to my once yearly weekend rave in said castle.

I then headed for the lowest point of the choke, with pinch bar in tow, to the slot I'd briefly investigated previously. The feature in question appeared far smaller than I'd remembered, requiring far more excavation work than I'd anticipated. After further inspection I realised the slot extended behind the pile of rubble, which constitutes the floor of the Rift above. A boulder weighing 50kg +, and beyond my abilities to lift, with so little space to correctly position myself, required shifting to perform the operation. The only solution was to dig a trench beside the boulder, allowing me to easily roll it out of the way. Ten minutes of work and I was through to the squalid chamber beyond, and now lowest point. Where I trod very carefully. The floor of the chamber held the characteristics of a stream bed, and appeared to be the destination of the water, during times when this part of the cave was receiving. A whisper of air could be felt and there did appear to be a continuation, which would require a good few sessions worth of excavation and scaffolding to safely pass what little I could see of the feature. I won't dismiss the possibility of a continuation here, but will definitely be exhausting every available option before I consider major work at this spot. Took some photos of the slot and chamber beyond before entering. Survey + Photos at base of article for reference to features.

The day of discovery was not complete, and once I'd climbed back up the rift, I investigated the other wide open option. A dismal looking passage extending North East from the three way junction between the Rift and Featherstone Chamber. A muddy hole downwards looked absolutely desperate, but an alternative, just beyond, via a squeeze and climb down was eventually performed, after many failed attempts. Headfirst didn't appear feasible, after a few goes, but I eventually worked out a still very awkward feet first bending manoeuvre to the head of the short drop. I was holding my breath throughout the whole attempt and put sheer faith in the boulder bridge and blocks around me staying put. A short muddy section of passage was followed to a dead end, with seepage from above in abundance. By that point cold was setting in and I was ready for off, so really only gave the feature a quick once over. A more thorough investigation, especially the floor where the water is sinking, will be done when I come to survey this section later.

Back in Featherstone Chamber a notch in the south wall, a feature I'd dismissed earlier due to the abundant other leads, was given a better look. The notch appeared blind previously, but I hadn't properly entered the thing. To the right at the end of the notch was a tight bend and opening beyond, and what looked like the head of another pitch. Because of the angle of where I was looking, or thought I was looking, I never considered the possibility it was part of the Rift I'd already entered. This feature appeared to extend towards the base of the previous pitch.

Spent a little time digging out the notch but knew by that point I wouldn't be passing it that day so packed up. Took some photos of the notch and what lay beyond. The borrowed camera decided to pack up on me part way through the process due to sand causing the lens shutter to stick.

Headed out feeling surprisingly buggered after only 2 1/2 hours at the choke.

It was during, or after this visit that the picture began to get clearer regarding what is happening down there. I concluded that rooting about at the edges is possibly not the solution. I don't appear to have hit rock bottom yet and the continuation may well exist, via another pitch, in the centre of the zone I'm presently exploring. Fragments of what was once a clean master joint appear to be jumbled about as a direct result of the faulting that occurred here. My discovery via the Notch that day convinced me the way on was via one of these now displaced relic joint features. My geological prowess is fairly limited so my conclusions above could be well off. When all is said and done, I'm mostly following my nose, but have no wish to waste time where time will be wasted. 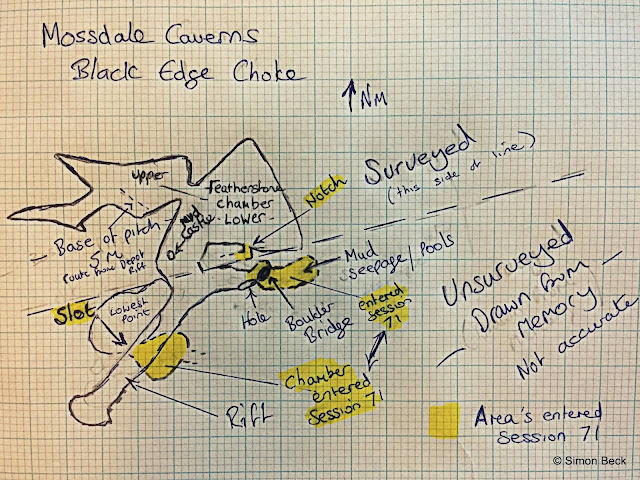