Note: It is almost ten months since this session occurred, making this the most overdue piece since the Sessions began. Session 78 had originally been intended to complement Sessions 76-77 & other favourites (1&2) as the final piece in a trilogy, covering my train wreck existence at the time. Aside from having no wish to delve back into that period and a need to get things up to date I'll be keeping it brief..

A further few weeks of work were endured post Session 77 before I quit, leaving me in a foul mood and wishing I'd gone with my gut in January and walked then. The job was well behind schedule and frustratingly poorly managed, though such trivialities were far from the reason. I was far from well yet hadn't quite cottoned onto that fact, but had the money to continue underwriting the constant state of not caring too much about it. Later and with hindsight came the realisation that taking a break to sort my shit out had been more important than money.
The fact I still felt gripped by new year was ridiculous three months in. The Resolutions I'd been attempting to sell myself were all but gone the moment I quit that job in early March. I then got-on-it 24/7 and didn't quit till the end of May...

A severe weather event and large flood occurred the middle of March. Mat Stockdale mentioned a group of kayakers having made it from Burnsall to Bolton Abbey in some ridiculous time like ten minutes.
Mossdale doubtless took a battering, with this being one of the bigger floods to occur since the extensions (Black Edge Choke) were first entered the previous summer, subsequently allowing passage a sizeable and destructive body of water as opposed to the formerly heavily obstructed one.

The possibility flooding would lend a hand, by doing some work for me, was something I'd anticipated since first deducing the change. The complete opposite was also a consideration, due to blockage or collapse, and appeared possible after a visit by Alex Ritchie the evening of the 27th (Mar19), when armed with a Go Pro and alone he filmed passage from the surface to Black Edge Choke. Unfortunately and rather unexpectedly Alex reported back after the trip that he'd failed to find the route onwards at the scaffolding, via the restriction (Rightism) to the White Hotel. He instead climbed up to the Boiler Room, noting the North Easterly passage I'd only recently explored myself. Although sceptical regarding the route being blocked, I knew it was far from impossible.

The final obstruction just prior to us (SB/AW) first accessing the White Hotel was a considerable boulder I'd capped just enough to allow passage. Although the boulder in question rocked and occasionally threatened to block the restriction, over time it settled and appeared solid. Obviously I continued to remain vigilante about it. The possibility this boulder had moved during the previous flood appeared the most plausible explanation. Having caved with Alex enough to regard him as a very adept caver I struggled to believe he'd missed an obvious way on as well.
A trip to see for myself was decided upon.

The following is taken from my journal and is all that's documented about the visit. I must have lost interest in writing this one up afterwards.

I was undecided for most of the morning about whether I was going to Mossdale. Physically I didn't feel up to it, nor did I even want too. But something came over me, I forget what, enough to galvanise me to go. At that point I didn't think Alex could have made a mistake like that. Anyway regardless of whether the need was there or not I had to get out of the house.
Was a gloriously sunny day, the ambience of which you'd expect later in the year. The air temperature was still down though. Felt only slightly out of shape, still a bit of a slog over.
The scar hinted of the monster flood from weeks previous, but still nothing of significance had changed. Much fresh sand deposits..........

Notes that accompany the entry mention the cobble/shingle bar in the 1st Canal at Blackpool Sands having completely disappeared. This had been a recent addition from a flood or two ago and made the going here awkward, what was once a nice deep water wade was reduced to an awkward stoop.

The entry section to Ouroborous was scoured throughout. The sludge and sand squirm had been dredged back to bare rock and cobbles.

North East Branch in White Hotel noted to continue further than originally thought, through a section of breakdown.

(briefly) Excavated rift in branch off Upper Featherstone Chamber. As expected drops to false floor which I suspect links with the mud banks in the lower chambers.


Aside from the journal entry & notes made and the fact the restriction through to the White Hotel was still wide open, my memory of this visit is pretty much non existent. The restriction (Rightism) was actually bigger than it had been, but I could also kinda see where Alex had gone wrong. A protein shake drum I'd been using as a bucket was jammed in the rift above the restriction and the route did appear to go down and back on itself.

One thing I haven't forgotten is the state I was in at the time. The fact this visit happened at all is testament to something. The what is questionable. As far as I was concerned this was my last ever visit to Mossdale.

Thanks also go to Alex for removing the pile of telephone line stashed at Razor Rocks, during his evening visit, and taking it to the surface. Good effort! 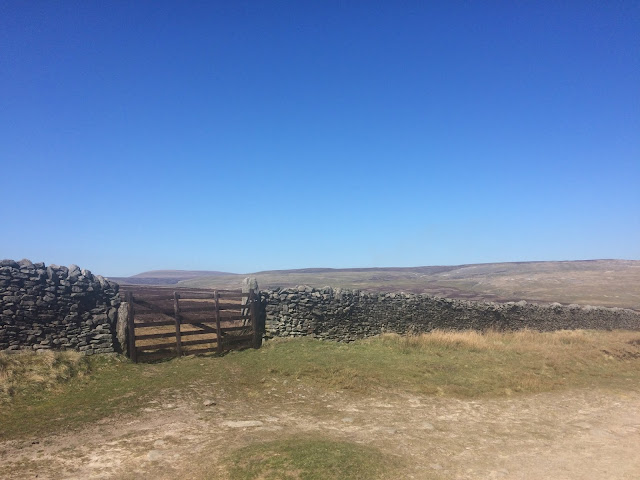 Copyright
© Simon Beck, 2020. The copyright for this article and photographs, remains with the author. It should not be reproduced without permission.
Posted by Simon Beck at 13:11