Today's was the first Mossdale visit of the new year and working trip since late autumn (2019). Aside from a Dowbergill solo early November and a visit to Blackpool Sands (Mossdale) on New years eve I hadn't done anything worthy of note since.
The purpose of work had me fooled for a bit, and lasted a few months before those old reflexes returned. A dream about Langcliffe Pot when I was still happily ensconced derailed any expectation it would last. I was in the entrance of Oddmire Pot, through one hole was a serene picturesque canal bank with cottages, happy people and an obvious nice life, through the other and past a pile of my caving books was the far harder and menacing dream version of Langcliffe Pot.

I then thought of nothing more but Mossdale for the remainder of the year. I think the desire alone was enough at the time, it gave me something to work towards, now that that very thing sucked. I also needed to consider my strategy regarding what next, before I did go back.
The fact that work during this period included seeing Eshton Hall everyday, en-route to the yard, was kinda symbolic and rather unsettling to begin with. I mean for christ sake, is it just me! Of all the Mossdale triggers for somebody trying to avoid that very thing, Eshton Hall was at the top of the list... Mostly though it was a pleasant daily nostalgia trip.
I was working on a major roof project there during the first year of the Mossdale Sessions (2017), it was also where most of the resources for the project came from as well.

Since discovering the Blowpipe and exploring the lower levels beyond (session 69 onwards) I've spent/wasted enough time searching for a quick and easy continuation. It was now time to start considering a longer term solution to moving things forward, i.e committing to one of the few likely looking spots, and pouring the resources necessary to push it, see it through.. I was still undecided about where, but knew I'd know when the time came....


Nicola arrived at the station mid-morning. Stopped at Screwfix for some bits and treat us both to some gloves from the Mossdale fund.. Shitty traffic around Skipton. Glad I'm no longer coming this way for work, especially the return through Keighley's present debacle..

Felt like a back breaking load with the drill & co. Been sometime since it was last used/taken down there, possibly as far back as session 69, 2018. When all is said and done I'm really only getting going again since then anyway.. It's been slow getting going again, but at least I'm still in the game. The intention is to apply pressure till it's cracked, or alternatively I do.. There's a sense what came before was just the beginning.

Had an unexpected encounter with a few lads from Burnley Caving Club,  Peter Wilson & Alec Peacock, who seemed quite surprised we were actually going down Mossdale that day. When you're connected via social media it doesn't seem like such a longtime since you've seen people, even though in this instance it was years since I'd seen either of them.

Aside from the unpleasantly cold water in the cave everything else was perfect for a visit so early in the year. Obviously we'd no idea what was on it's way a few weeks from then.
I still speak to people who are very surprised I manage to visit all year round, and to be frank that was always the case even before I lowered the main dam at the end of canal #2.

A few sessions I raised the subject of an old picture I took of Blackpool Sands in 2005, before the now huge cobble/shingle Bar began to gain in size, in the area where you enter from Assembly Hall. The intention was to take a picture and compare the two here. I finally got round to doing this today, although I didn't quite get the angle right, relative to the older version. I hadn't noticed before but the date 22/08/05 is stamped on the back of the photo.

As I mentioned the Swims were freezing, and we both gasped our way through. The third canal had obviously been dredged again by winter flooding, and was almost back to being The Swim it once was. I think Nicola pretty much swam this section without having a choice in the matter.

A major collapse of the false floor in Boulder Hall had also occurred over the winter. The feature in question was a bridge of boulders that overlaid the initial stream trench that enters Boulder Hall at the upstream end. Entry to the chamber was possible via this route but I long avoided it for purely this reason. I guess vindication eventually comes to those who wait, especially my warnings that fell on deaf ears with at least one person here.

Some may also recall Roger Rabbit from the previous session, who at the time had been gracing the most constricted section of Confusion Passage. Winter flooding had for once done something positive and removed it.

The strap on my dry bag broke at some point during entry making the drill a twat to carry for remainder of trip in. It doesn't help that the drill wasn't used on this outing either.

Once at the choke I headed down to the lower levels for some tools while Nicola investigated the two inclines heading NE of the White Hotel. It was whilst grabbing tools in Featherstone Chamber that I noticed my Daren Drum had been crushed/imploded. The lower levels had obviously been completely underwater. Considering the intermittent draughts here, which have never been as evident as those in Alley Cat, the outlets are obviously well blocked.
I'm not sure what I was expecting that session with the bag of tools I dragged up to the BlueRoom. It's also the closest to liberation those tools will ever see.

Nicola had little to report back from her NE incline investigation, all aside from finding a pencil. This had been resting on a chokestone jammed in the first and steepest incline (on the left as you first enter White Hotel). It wasn't till later that I remembered placing it there after forgetting to pack it away during one of the surveying sessions of 2018.. Considering how useless my floodmarkers have been so far, the pencil in question has to be the best one so far and confirms the backing-up of floodwater hasn't been that high.. yet.

We then attempted to gain entry to the area SW of the Airlock (chamber), via the two possible access points; the tight bedding that leads SW from the Airlock and the ramp/incline on the right as you enter the Blue Room. Neither were possible, and as I'd already deduced some enlargement of the route will be necessary to achieve this. It was also decided that approaching via the Airlock route would be the easiest. Even though I'd brought the drill + plugs/feathers, the prize in question didn't seem worth the effort unpacking it all.. Capping was deemed the best way forward there, and I was out of ammunition at the time.
Before heading out I also had a look up the first and steepest incline out of White Hotel (only my 2nd time up there, the first being the day we made the break-through here - July 2018). I noted today that it probably connects with the Northerly outlet of the Boiler Room.


The lowest of the high water markers at the Serpent was checked during this trip and contained a little water/mud. I was pretty convinced by this point they weren't working, and suspected the water was evaporating out. Nicola suggested placing a positive control marker to check they were definitely working, which we did a few feet above the stream at the juncture of Confusion Passage/Broadway on a rock shelf anchored in place with numerous boulders.

After another gasp inducing return through the Swims we retired to our regular Wetherspoons in Ilkley for tea.

Overall a very quotable day, considering just about everything said was scrutinised to varying degrees of laughter. 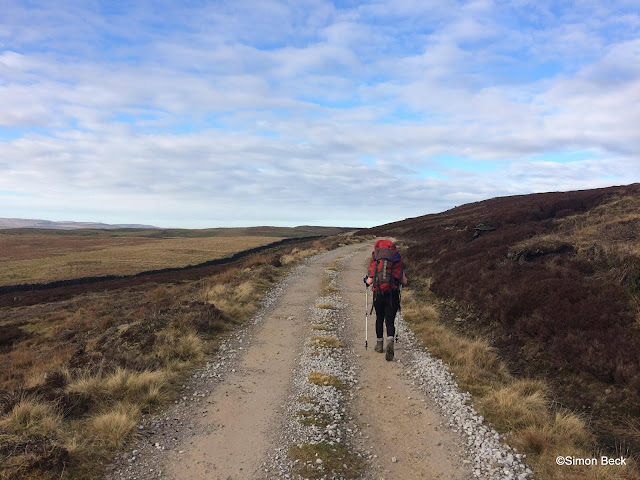 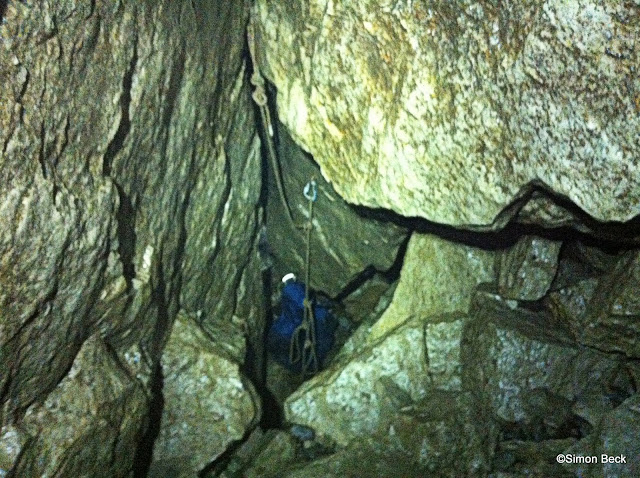 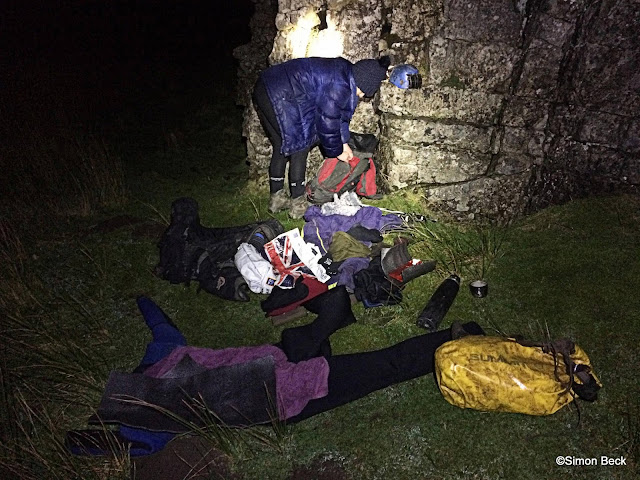 
Copyright
© Simon Beck, 2020. The copyright for this article and photographs, remains with the author. It should not be reproduced without permission.