Another early start, arriving at the scar for half nine, underground for ten.

Strangely the entrance series felt like a right arse clencher. After somewhere in the region of 250 traverses of this section, I guess I'm pessimistic it will be me something drops on.

Main duck was similar to the previous session's departure state. Had to remove helmet and duck under again. Spent a short time removing more of the dam. The country being plunged into nationwide lockdown was looking more likely over the coming days. I wanted to try and do as much as I could just in case there was another big flood before I was allowed back.

The draught in the narrows prior to Piston Chamber was not as evident this time round, the weather topside was markedly different.

Did a little remedial work at the White Hotel before starting properly. Began building a retaining wall to add some support to the shelf/step, which must be crossed during passage of Rightism, over time due to floods I've a feeling this will become less stable. Will add a bit each session to this.

Had an awkward piss, journal states, due to rear mounted zipped on new Aqualung Wetsuit. Considering how flexible and warm it's been, so far it's worth the sacrifice. Beats a Rigor Mortis Bac. The last time I wore one of my oldies I painfully recall having the lyrics of Luna Chicks 'Light as a feather' going round in my head throughout the entire trip.

Forgot to mention in previous sessions write-up that I'd brought down a two piece set of waterproofs which can stay down here till they die. They're a lot thicker than the previous ones used, so I'm optimistic they will keep me warm and save me having to finally invest in a proper oversuit.

Gathered some tools plus the stuff I'd brought, incl surveying gear, and headed for Alley Cat Series.
The scaffolding still looked in good nick down there, and at that point I was still considering stripping it all out that session. A niggling doubt existed I was doing the right thing if I did.
The Alley Cat Series felt like a past life I'd suddenly returned to, the place oozed nostalgia, this after all was really the first time I'd been back. Everything that went down here, occurred that mad summer of 2018, before finding the Blowpipe pitch and that October's Castle party, a period which took some getting over, recovering from..

The air felt fresh in there, as it always does. Some of the mud appeared gone, especially from the ramp.

So back in the Trench, this time clad in waterproofs, I re-opened Little Shop of Horrors, suddenly feeling more drawn to continuing work there than I'd expected. There'd always been an open question here, I guess the Blowpipe and lower levels appeared to answer it for a time.
I blocked entry to Little Shop of Horrors at the end of Session 66 with the debris I'd extracted from the Pot and fluted Columns when I was trying to gain better access there. I was now reversing the procedure and handling most of it for the second/third time. Although I suspected all the floor in this sector was false, I hadn't realised the full extent of Little Shop's. There's a definite block-filled downward trend, which I dug at for a while. There is also the issue of what lay through the opening on the far side of Little Shop... Feels very Nemesis.
Continuing work here for the time being seems probable. It's possible I can salvage a little scaffold to further progress here, but it's looking more likely I'll be bringing more scaffold from home.
There's still a lot to investigate in this section. I'm especially interested in that West/East trending back wall of Little Shop of Horrors/Wharfegate Chamber, and in reaching it somehow.

Made another Vlog video that session, not long after I'd reopened Little Shop, and before I started excavating the floor.

Alley Cat Series was then surveyed, albeit quickly, only the basics were collected, bearings/leg distances with a basic drawing made on the move. I doubted it was much different from what I drew from memory anyway.
After a breather (smoke) in the Blue Room, feeling knackered and ready for off, I decided instead to extend the session and do some work in the lower levels. Didn't remove waterproofs while in transit, like I'd agreed I would, I ripped the arse out of the pants negotiating the head of the Blowpipe.. great! good job they were cheap cheap.
Attacked the floor of Last Resort for a bit, with little or no depth achieved. The area where I'd previous felt moving air was also inspected, where the Notch joins Last Resort, which is pretty much the bottom of the slope in Featherstone Chamber. Another brief video was made before heading back up.


Had I known we'd be restricted to our homes from that evening onwards I would have surveyed my way back along Ouroborous Passage. To give me something to draw up during lockdown.

Steady trip out feeling buggered yet bloody great! Don't think I'll ever pass up the opportunity of being here alone in favour of full time help.

Stopped in Boulder Hall to take pictures and make a video of the collapse. The camera switched off on me part way through. The collapse can be seen at the beginning of the Boulder Hall segment on the Youtube video for this session. Felt like a long session, though without a clock I'd no idea.

Returning the Swims was fun and refreshing, even managed to keep my helmet on this time through the duck, with most my head underwater though. Can't get over how clear the water was, with a lot of trout spotted.

A very worthwhile visit, feeling psyched about the next stage, whenever that might be. When I do return the focus will continue for the time being in the Alley Cat Series, and when a decision is made about where, a definite spot in the lower levels around Last Resort. 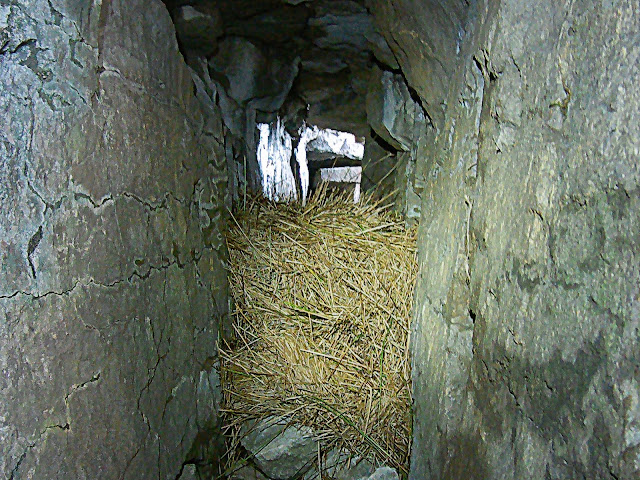 
Copyright
© Simon Beck, 2020. The copyright for this article and photographs, remains with the author. It should not be reproduced without permission.
Posted by Simon Beck at 16:45