Postponed from the previous day. I hadn't quite been ready, with things still to organise and acquire, which is a pathetic excuse considering I'd only been waiting eight weeks for the opportunity to return. At the time one more day didn't feel like such a bad thing. Though, had I known what was coming Monday I'd have done back to back days till then.

An exceedingly early start was had, not necessarily making up for the previous day either, find I'm far better motivated with really early starts than slightly later ones. My neighbours probably thought I'd shit the bed.

I'd already made arrangements with my call-out the previous evening, but said I'd send a text to confirm as I made my way over-land. Due to a faulty battery on my main phone I'd swapped to an old i-phone at the last minute but made a mistake swapping the numbers. The text in question ended up going to my house mate who at the time wouldn't have made head nor tail of it. It wasn't till after the trip when I received a text from my call-out asking whether I was still going that I realised my mistake. He'd known something was amiss and would have acted when the time came. Usually I wouldn't worry too much about it, not having it that is, it's more the inconvenience to others. But under the circumstances; the fact I was shadowing three weeks of horrendously wet weather, meaning you never know quite what to expect, a preference for call-out is a bit of a no brainer. I once went to Steam End Cave without any call-out at all after my phone died walking in.

Cloudy and windy on the fell. I even checked the forecast a second time.

Even without the knowledge, or having been a spectator to those three weeks of severe wet weather that occurred the previous month, the land flanking Mossdale Beck was enough of a giveaway, and lent the Scar a daunting atmosphere under the sky that morning. I'd be lying if I didn't admit feeling vaguely hunted by the grimness to come.

Underground for half nine, and taking my time, especially with the entrance series. Something from the ceiling was noted to have disappeared almost straight away. Grass and moorland debris were hung up everywhere. The scaffold I'd built a few years back to support a possible ceiling threat had stood up well to the barrage. A lot of further loose was shifted aside as I made my descent.
Fossil Chamber was noted to have been completely filled with water (ceiling debris)..

Water in the 1st Canal was very clear, expectedly cold, with a reduced airspace through the low section. The dam downstream at Razor Rocks had been restored some, raising the level a bit. So far so good I was no doubt thinking.
As I approached the 2nd Canal I knew straight away things were very different on that front, even more so as I entered the water and looked downstream, seeing half the usual airspace disappearing off into the murk, maybe even less. The fact I questioned whether the main duck was even passable made me wonder whether these conditions were new territory for me, or maybe just a longtime since I'd had to deal with it like this. Either way the duck was gonna be desperate. The experience was certainly akin to my early forays in this cave.
After swimming most of canal, I paused just before the first lowering to put my game face on, sans hood which for the first time ever I'd forgotten. The first lowering required half my face in the water, which a few summers ago had been at waste level. What lay ahead now appeared unfamiliar enough I actually had to think about where to go. With my helmet now off, further low going brought me to a cross rift heading right, which I recognised as being in the roof above where the route usually zig zags through the duck proper. I followed this with helmet in one hand underwater, due to the lack of room, and drybag in the other floating behind. I then looked left where i knew the duck must go to find grass, froth and a totally unusable airspace. With both hands busy I managed to align myself automatically with the shape of passage I knew existed underwater and propel myself at the same time, through the three foot or so dive. I even managed not to bang head. My buff was almost a goner though. I exited the duck totally waterlogged with a face full of grass/froth to find the newly rebuilt dam literally rearing up over me.

Before breaching the dam I got some pictures and a bit of film. The folded shovel that's usually stashed there was gone but fortunately with the sediment (cobbles/shingle) being fresh it was pretty easy to shift, unlike the aeon compacted stuff we'd shifted three years ago. I was still there a good while and thought water levels were well on their way down as I continued onwards.

3rd canal and original Swim were very deep with the going in places very low with the increased flow all of a sudden.

Checked the positive control marker at the head of Broadway finding it half full of silt and nothing else. The water was evaporating out of them after all. I spoke with Nicola afterwards about this and she's apparently on the job.

Strong draught met through the narrows leading to Piston Chamber, enough to excite me regarding what was in store. A block had been detached from behind the A-Frame above entry to Rightism and needed shifting before I could pass. Tried to be as careful as I could passing Rightism, over the shelf/step to White Hotel, surprisingly this appeared well intact.

The head of the Blowpipe appeared ravaged by flooding, a clump of grass hid most of the bolt and carabiner. The tool bag I'd liberated to the levels above last session was caught on the choke stone below.

The outlet of Last Resort appeared washed open when I peered in. A pile of collapsed boulders had to be shifted before I could safely enter. There was little change there on inspection. The floor I was mean't to be attacking at Last resort wasn't touched that day.
Made my first attempt at a vlog video before heading back to the Blue Room. The intention is to begin videoing as much of the sessions as I can without impeding progress too much.

Back in the Blue Room, found Daren Drum in the alcove, nowhere near I'd left it, and managed to open lid. Contents seemed fine. The same couldn't be said for a completely flooded first aid kit, which was thought well sealed in a dry bag. Made a quick video in the Blue Room, then headed back to the main cave feeling spent but satisfied after an already eventful outing.
Another tick partially completed was a few pictures of the Ouroborous entry section, which is pretty easy on the eyes.

On returning to the main duck, I was surprised to find levels there still very high. Hesitated for a second whether to remove more of the dam, but just went for it instead. A slight helmet off dive was again necessary though the route far more visible this time. I surmised later, the amount of water my dam breach allowed through was still less than the amount flowing into the cave. Found the folding shovel whilst entering the 3rd canal literally just beyond Boulder Hall where the water level marker is placed every session, very surprised how something so streamlined had been carried the distance it had, through a good distance of open water then some rather devious stream channels. Couldn't quite believe my eyes when I saw it.

Exited the cave to better weather and plenty of bods on the fell. The day was one of those experiences you'd be nervous about if you knew what was coming beforehand, but with hindsight glad you had. They keep you sharp and on your toes especially here, where complacency is never a good thing. 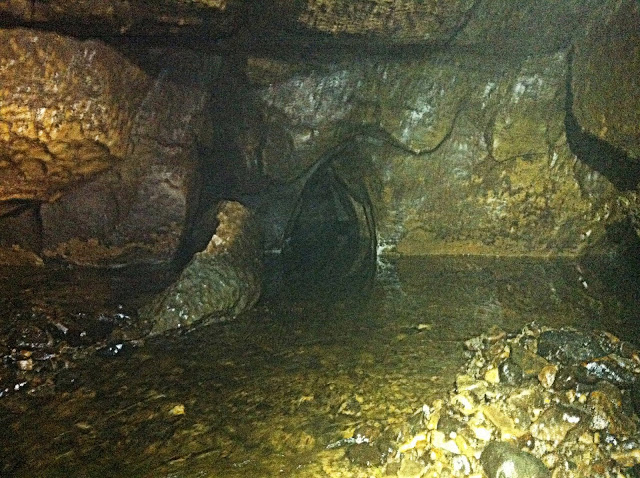 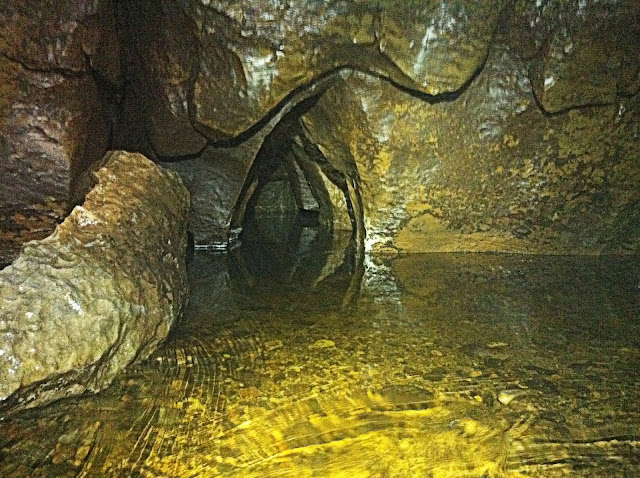 Copyright
© Simon Beck, 2020. The copyright for this article and photographs, remains with the author. It should not be reproduced without permission.